StreetWise has changed the face of homelessness in Chicago 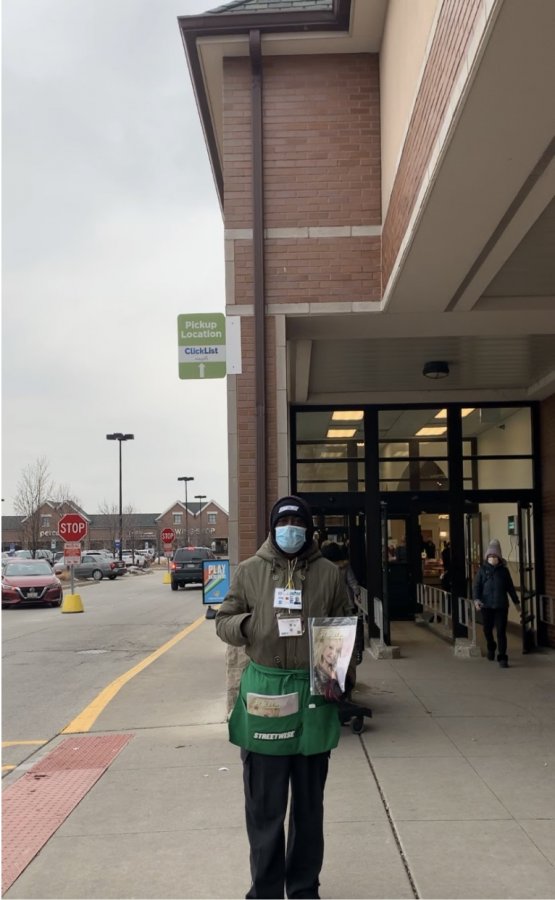 Lee A. Holmes poses outside of a Mariano’s in Roscoe Village, holding an old edition of a StreetWise magazine. Having a deep passion for entrepreneurship, StreetWise has provided Mr. Holmes with an opportunity to exhibit and learn new skills by selling the magazine daily.

Lee A. Holmes repeats the phrase for what might just be the hundredth time that day: “Would you like to purchase a copy of StreetWise?”

People walk right past him. They pretend not to notice his green apron loaded with the latest edition of the StreetWise magazine – yet Mr. Holmes, a StreetWise vendor, remains unflustered and continues with his spirited pitch.

By presenting vendors like Mr. Holmes with employment opportunities, StreetWise has simultaneously provided many with a life outside of homelessness and changed perceptions about the homeless.

When a vendor joins StreetWise, they undergo an orientation, and as a reward are provided with 15 free magazines to sell. After the orientation, vendors pay 90 cents for a magazine and sell them for $2, keeping the $1.10 along with tips. Topics in the magazine range from local news to profiles and columns.

While Mr. Holmes was familiar with StreetWise long before, he only joined after experiencing homelessness.

“I went to one of their orientations at one of their old headquarters, and I was, like, ‘This is a scam, who does this?’” Mr. Holmes said.

Despite Mr. Holmes’s initial doubt, he immersed himself in the organization’s programs such as the Transition to Employment Program, which prepares individuals for finding jobs. He also appreciated that the organization provides vendors with basic necessities such as food.

What he found most valuable were the countless hours he spent working on the streets. Mr. Holmes constantly discovered new ways to attract individuals to purchase from him.

“The whole thing is about how do I get an individual that won’t acknowledge me and won’t speak to me to buy a magazine from me and become a loyal customer,” Mr. Holmes said. “So every day or every other day you have to recreate your whole self.”

However, attracting customers was often difficult for Mr. Holmes, since many refused to purchase from him based on the negative perception surrounding the homeless community. StreetWise hopes that vendors can form connections with those who pass by and help to alter these perceptions.

“I had a young lady come up to me and ask me what rehab center I came out of, and I looked at her like, ‘Does it look like I am a drug or alcohol addict or something?’” Mr. Holmes said. “Would you rather have me have these magazines in my hand or a gun in my hand taking your wallet? I think this is the better option for me.”

According to Mr. Holmes, that same woman was inspired by his words and became one of his loyal customers.

Since vendors at StreetWise independently sell the magazine and are in control of their own profits, Mr. Holmes has picked up skills to expand his passion in entrepreneurship, which began at a young age.

“I was more interested in trading papers and was very fascinated about buying something for one price and selling it at another price,” Mr. Holmes said. “I was able to generate or make money off of the little money that I had.”

Although his business was successful, he had no concept for financial planning. After joining StreetWise, he learned how to budget his money and spend it on essential items.

Mr. Holmes has since recruited others to join StreetWise as vendors, including his new business partner Paula Green, who he met through family. Ms. Green sells the magazine and also takes pictures for it, which has helped guide her down a good track.

“I was basically homeless, and I didn’t have any direction, but now I feel like I am a little bit more stable,” Ms. Green said.

For the future, Patrick Edwards, executive assistant of StreetWise, hopes individuals who buy the magazine actually read it, and view StreetWise as the vendor’s business rather than solely a donation.

“Aside from the support for the vendors, I want you to feel as if you got more than $2 worth of information and experience what I like to call goodness,” Mr. Edwards said.

When his shift is over, Mr. Holmes packs his things and leaves the streets. However, his work is not finished. He returns to the area he resides to brainstorm possibilities to increase sales for the following day.

Click the following link for an interactive map of StreetWise locations