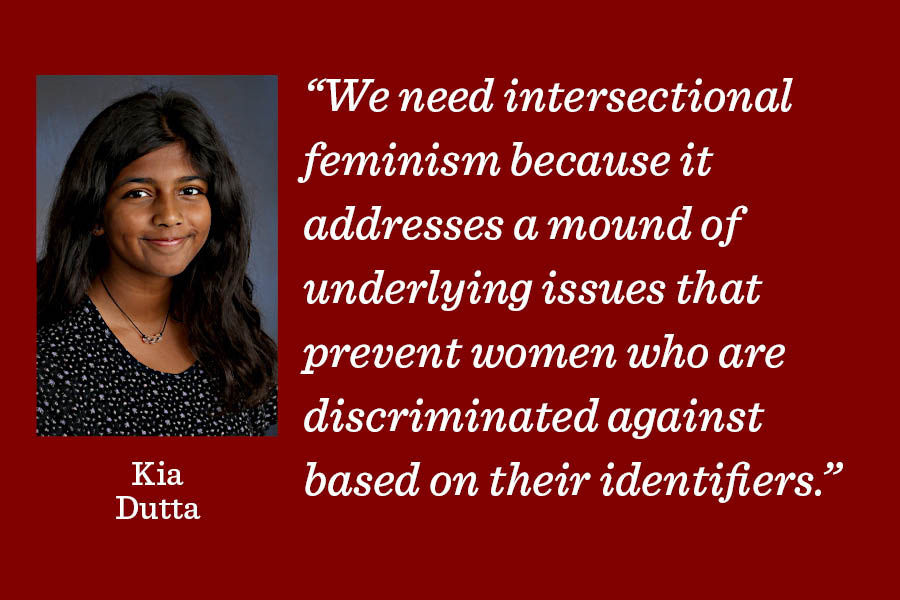 We need to work to replace the spot second- and third-wave feminism holds in our society by adapting intersectional feminism in our activism, as these types of feminism are not enough to advocate for total gender equity, writes City Life co-editor Kia Dutta.

Bored in an airplane seat, I scanned my eyes across the plane – when a magazine rolled up in the pocket in front of me caught my eye. In a bright, bold pink font were the words “#WomanPower” on the cover and I was quickly excited to read the diverse stories of strong women that I assumed the pages would discuss. Was I about to learn about the first woman of color to win a Pulitzer Prize? Or about an immigrant who made a life for herself in an entirely new country? But unexpectedly, as I leafed through the pages, the consistent pattern found on each and every page hit me with a wave of disappointment.

All I saw were stories of white, cisgender women.

We need to work to replace the spot second- and third-wave feminism holds in our society by adapting intersectional feminism in our activism, as these types of feminism are not enough to advocate for total gender equity.

Adopting intersectional feminism ensures the struggles felt by women of color aren’t abandoned by the feminist movement – an issue that has been stagnant throughout feminism so far. The exclusion of Black women from second and third-wave feminism in particular was made clear in popular opinions expressed during the 2015 Women’s March in Washington, during which many Black women opted out of the event due to feelings of betrayal from the feminist movement in the past, according to NBC News.

As one of the largest protests to ever take place, the event made history, but the protest initially did not include any people of color in the planning process. While organizers later added people of color to their team after being scrutinized for not doing so, this demonstrated a historical pattern where black women are pushed away from leading the direction of the movement, just as with suffrage rights a century ago.

Second and third-wave feminism have also overlooked the LGBTQ+ community while building the movement. According to a report on how the intersectional feminist perspective impacts LGBTQ+ youth, second-wave feminism has failed the community by not fighting for their rights in years past. Through the exclusion of nonbinary and transgender people in the feminist movement’s fight for “gender equality,” rates of hate crimes, family abuse and targeting in general have been heightened toward these groups.

A study conducted by GLAAD revealed transgender people are 27% more likely to experience hate-based violence than cisgender people. Of these crimes, 78% of the victims are people of color – revealing intersection between gender, sexuality and race, showing the importance of considering all identifiers when approaching gender equality.

The second and third-wave feminist movements have not battled against the dehumanization of disabled women. According to a paper by the Association for Women’s Rights, it’s exceptionally difficult for the community of disabled women to resist factors of oppression compared to other oppressed communities, let alone to build a movement to fight for themselves. However, that’s exactly what second and third-wave feminism left them to do by excluding them from the movement. If intersectional feminism were to be adapted, the feminist movement could use its power to support disabled people who struggle with violence and neglect and to battle oppression much more effectively.

We need intersectional feminism because it addresses a mound of underlying issues that prevent women who are discriminated against based on their identifiers – the aforementioned and others such as socioeconomic status, religion and more – to be empowered by the movement.

Like every change, this shift to intersectional feminism needs to start small, and it begins with every individual. Each person who identifies as a feminist needs to educate themselves on the struggles that the oppressed people around them go through, whether experiences of LGBTQ+ people or systemic racism. Once this is done, feminists can begin using their voice in protests, social media and other platforms to voice their support for their peers and demonstrate intersectionality in their feminism.