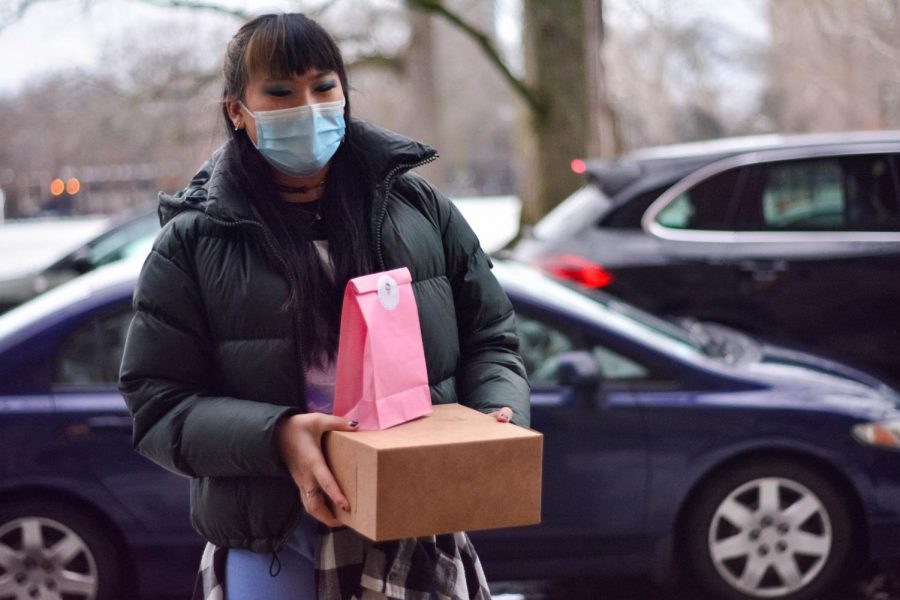 Junior Chloe Ma delivers her baked goods to a customer.

Junior Chloe Ma has perfected her recipes for treats like these through her experience baking for family members and is now selling them on Chloe’s Confections, an online bakery she began during her pandemic spare time.

With her business, Chloe has taken the initiative to share her goods with others, while donating to charities and learning the intricacies of baking up a small food business from scratch.

“My dad always told me the best part of cooking is seeing the look on my face when I eat his food,” Chloe said, “and I feel like that really influenced me into wanting to spread that feeling to other people.”

According to Chloe, her business, which she launched in November, has received over 20 orders. Every month, she donates 30% of her profits to a charity such as the Native American Rights Fund, the American Society for the Prevention of Cruelty to Animals and Meals on Wheels America.

Having a baking business involves more than just mixing ingredients. One of the challenges during the process of setting up her business was getting a license to use a shared commercial kitchen, which she uses to bake all of her confections.

“They’ve got the sink, the burner, the ovens and a fat Hobart mixer and that’s it,” Chloe said. “You have to bring everything else: your ingredients, your whisks, spatulas, and so on and so forth.”

Chloe strives to bring her customers fresh treats, so after baking, she delivers the food herself.

“I like making things as fresh as possible, so if I can make the dough a day beforehand, that’s great, but I’m going to bake it on the day or the night before because it’s always better fresh obviously,” Chloe said.

Chloe’s recipes are designed by taking two or three existing recipes and making modifications such as using brown butter rather than regular butter to perfect the taste.

“Every single thing on her menu is something that she has made a bunch of times, and she really has put her own twist on it,” Ms. Ma said. “It started with a recipe, but then there’s some Chloe bit to it, like something that makes her cookies taste exceptionally good.”

A favorite item of junior Kara Tao was the apple turnovers, one of Chloe’s signature treats.

“The outside is very crunchy, but like once you bite into it, it’s actually very soft and the apple filling is really sweet,” Kara said. “It’s just like a whole explosion of apple-filled deliciousness.”

Although the initial suggestion of starting a business came from her mother, Chloe said she drove the process of building the business.

“Once it actually started happening, I did all the research,” Chloe said. “I did all the calls. I filled out all the paperwork. I filed the tax forms. I did all that.”

While calculating the costs of her ingredients and obtaining a Food Service Sanitation Manager Certification, Chloe dealt with the slow communication process of the pandemic and worked through the behind-the-scenes logistics.

“The internet was surprisingly unhelpful for this, which is weird because you can find anything on the internet but like starting a business isn’t that,” Chloe said.

Chloe has considered attending culinary school but believes that her baking skills are best suited making confections for her business and family.

“I enjoy baking and cooking for myself and others,” Chloe said, “but if it became my entire life, I think I would enjoy it less.”

She noted that her slogan, “Baking for Good,” highlights that her main goal with Chloe’s Confections is to help others, especially during times like the pandemic.

“I want to make a change,” Chloe said, “and I know I can do that with something that I have a talent for.”