A canvas for activism: Alumna bridges gap between Black and Asian American communities through streetwear 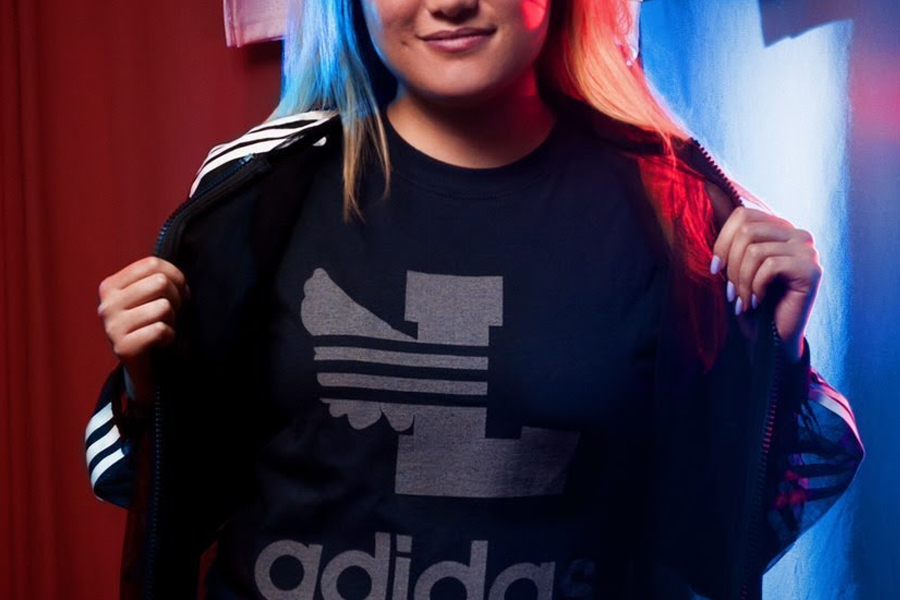 Lab alumna Ellen Ma shows off clothing from a Leaders 1354 collaboration with Adidas.

As the head designer of Leaders 1354, a Chicago-based sneaker shop, Ms. Ma is using her platform to lead by bridging the gap between Chicago’s Asian American and Black communities through streetwear and art.
First established in 2002 in Hyde Park, Leaders 1354 has moved to a storefront in the West Loop. The Chicago streetwear brand has collaborated with Adidas, Billionaire Boys Club, and the Chicago Blackhawks since Ms. Ma started there in 2016 in her senior year at the School of the Art Institute of Chicago.
“Leaders was one of the first streetwear brands in Chicago…” Ms. Ma said. “And that started everything.”
Leaders 1354 has built a community by teaching both business and soft skills to developing artists and entrepreneurs, according to Ms. Ma.
“All the Chicago youth that you know of have either worked in Leaders or had some kind of affiliation,” Ms. Ma said, referring to and listing other influential streetwear brands from Chicago. “Leaders gave all these guys the confidence to do what they want, and it’s like a learning place.”
The brand recently collaborated with GoodKids MadCity, a group of young activists led by Black and brown youth from the South and West sides of Chicago. The group is calling for an end to violence in the city through increasing community resources instead of policing.
“We thought that GoodKids MadCity, they represent the leaders of the youth,” Ms. Ma said. “They’ve done so much work within the city, and we also want to give back to the community, because that’s part of what Leaders does.”
Streetwear is a canvas for activism, Ms. Ma said.
“I like how it is rebellious — in terms of fashion, and I guess art,” Ms. Ma said. “There’s this idea of high fashion — only the elites can wear it, can utilize it — but the idea of streetwear is supposed to be affordable, is supposed to be for the people.”
Ms. Ma sees streetwear as a platform where fashion, art and activism converge. The collaboration with GoodKids MadCity exemplifies what this intersection looks like in action.
Ms. Ma wants to use streetwear to connect Asian and Black communities in Chicago, but she knows that prejudice and language barriers are obstacles to that goal.
“I feel like there is a lot of, like, fear between the two communitiess,” Ms. Ma said. “I want there to be more understanding.”
She also believes the shared sentiment of struggle is something that has the power to bring understanding between people.
“We can relate to the Black community in terms of our struggle. You know, being mistreated but also having a deep-rooted cultural experience,” Ms. Ma said.
Experience across the Asian and African diaspora is vast, but commonalities can be found in struggles to survive and adapt.
Ms. Ma has always set out to be a voice for the Asian American community, motivated by the lack of representation in mainstream culture.
“In middle school I would always say to myself, ‘I gotta make Asians look cool, we gotta, I gotta do something about this,’” she said.

Ms. Ma wanted to use her platform to give her parents a voice, and along with that the Asian community to foster understanding about an aspect of the Asian American experience.
Her father, a microbiologist at the University of Chicago, lived through the Great Chinese Famine. When schools began to reopen at the end of the Cultural Revolution, her father took the merit-based entrance examinations and scored in the top three percentile, gaining acceptance to medical school.
After garnering success in China, her father immigrated to Chicago in 1993, her mother following in 1994 with Ms. Ma’s sister. None of them knew English.
“They didn’t know anyone here,” Ms. Ma said. “They literally started from zero. They came here with like $1,000 — it’s like the typical immigrant story. They always talk about that.”
Ms. Ma said she wants to showcase the struggle that she and her family endured.
“What it takes to immigrate here, what my parents sacrificed, what they’ve been through,” Ms. Ma said.
Stories of struggle like those of her parents are what Ms. Ma believes can connect marginalized communities that sometimes seem at odds.
“It’s a very human connection. Struggle is very human. I feel like that connects people.”
Despite only graduating from U-High less than a decade ago, Ms. Ma has gained prominence and believes she’s already started making an impact as an Asian designer.
“I feel like just me being around the streetwear scene, the art scene, it’s already made an impact,” Ms. Ma said. “It’s really cool to see that after people started to know my name, that activist groups in Chinatown are saying that they’re following my lead.”