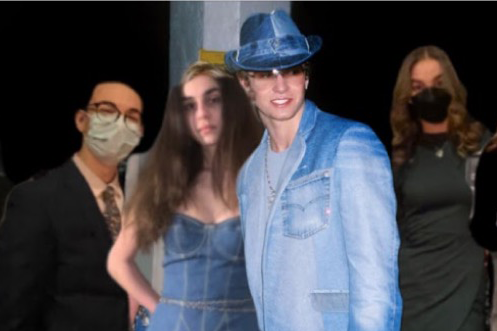 The Jalapeño Poppers, this year’s winners of the Hunt, pose for an unlikely photo with Justin Timberlake. For one of the annual scavenger hunt’s challenges, juniors Ben Luu, Adrianna Nehme, Alina Susani and Saul Arnow had to create an image of themselves with their favorite celebrity.

A team of juniors won this year’s Hunt, an annual scavenger hunt as part of ArtsFest that requires teams to earn points by completing as many of the listed activities as possible. The winning team, Jalapeño Poppers, consisted of juniors Saul Arnow, Anathea Carrigan, Ben Luu, Adrianna Nehme and Alina Susani.

Anathea and Adrianna are editors on the Midway staff but were not involved in reporting this story.

Due to COVID-19 restrictions, tasks for the Hunt had to be done either virtually or following safety guidelines. For some of the tasks, teams had to take a screenshot of their group in a Zoom meeting and draw their favorite teacher.

According to Ben, because the team put in more effort this year, they completed all the assigned tasks.

“It was very glorifying, since we got second last year and we almost did all the tasks,” Ben said. “It was just very rewarding, and like we kind of had a sense that we would win since we figured not all the teams do all the tasks.”