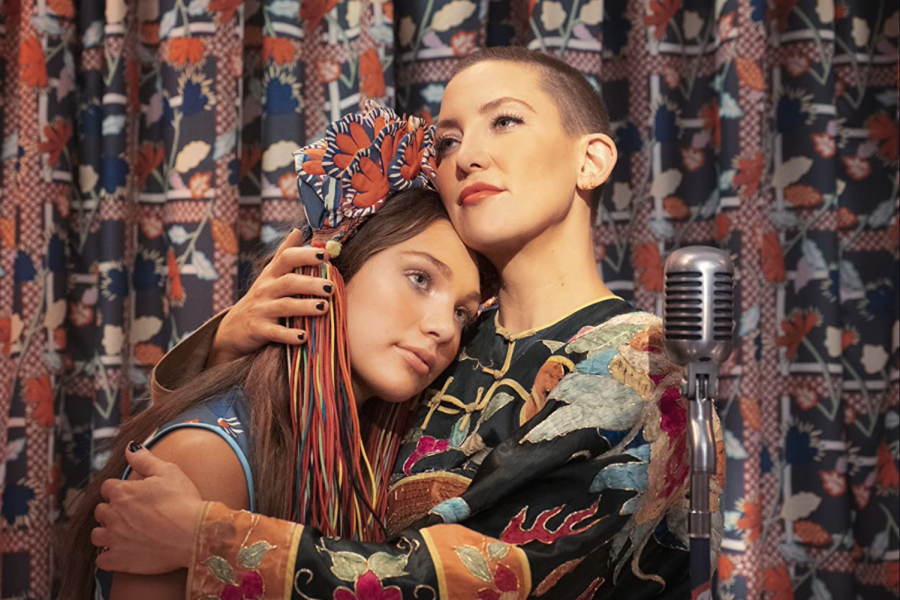 In an enclosed orange room, a girl with large space buns and yellow eyeliner picks up a telephone, drops it with a sudden jolt and then starts hitting herself, all while music is playing. Bright flashes of light flicker across the screen as the camera changes angles with each of her movements.  Sia made her directorial debut with “Music,” which featured 10 new songs. However, the lack of consideration to fairly portray disability and neurodivergence is insensitive and overshadows the heartfelt storyline, ultimately perpetuating ableism.
“Music” is available for rent on Apple TV+, Amazon Prime Video, YouTube and Google Play.
The film stars Kate Husdon as Zu, who’s a recently sober drug dealer who becomes the guardian for her younger half-sister, Music, a teenager with a type of nonverbal autism.
It starts with Music’s grandmother suddenly dying, and Zu shows up expecting to be left with money. After realizing there’s no money and she’s Music’s new guardian, she’s determined to leave Music at a care facility and move to Costa Rica. However, she develops feelings for their kind neighbor, Ebo.
Before “Music” was released, Sia faced backlash for casting neurotypical actor Maddie Ziegler as Music, saying she refused to do a project without Ziegler, and that “it wouldn’t make it art” if Ziegler wasn’t included.
The disability community is lacking representation in the film industry, where 95% of characters in films and television are played by non-disabled actors. They are the most underrepresented minority in Hollywood, so casting Maddie in this role counteracts the need to cast disabled actors.
Maddie’s dancing and acting was expressive, but her character’s general movements emphasize autism and is akin to mockery. Instantly, “Music” faced criticism for its depictions of neurodivergence, but the film isn’t really about autism. It’s a story about recovery from addiction and striving to be better. We never really get to know Music. We know she walks around town every morning, likes eggs and is allergic to bee stings, because these attributes contribute to the plot.
One scene depicts Music having a seizure in a public park. Ebo instructs Zu to physically restrain Music, a tactic that’s considered dangerous and can increase the seizure’s severity. To depict this event in this way not only demonstrates a lack of knowledge about epilepsy, but it can also be triggering for viewers with anxiety or sensory processing disorders.
Despite apparent flaws in disability and neurodivergent representation and portrayal, “Music” was nominated for two Golden Globe awards: Best Motion Picture — Musical/Comedy and Best Actress in a Motion Picture for Kate Hudson. The nomination for Best Motion Picture disregards the ableism in “Music.” It’s important for disability to be accurately portrayed in the media, not stereotyped and mocked. This overlook highlights the prevalence and normalization of ableism in Hollywood productions.
While the plot of “Music” is compelling, the depictions of disability and neurodivergence are ableist, and an award nomination for Best Motion Picture underscores the deep engravings of ableism in Hollywood productions. “Music” has a heartfelt plot and upbeat soundtrack, but it’s impossible to overlook the misrepresentation and generalization of the neurodivergent community and should not be encouraged by watching or promoting this movie.