Cartoon Network’s ‘The Venture Bros.’ changed the face of cartoons in the film industry 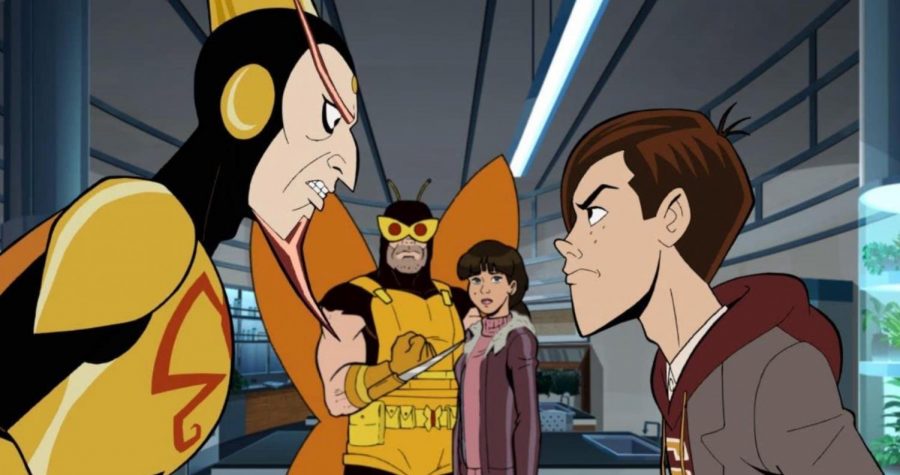 Characters Dean Venture and the Monarch stare at one another intently in Season 7, Episode 4 of “The Venture Bros.”

While cartoons have been popular ever since their invention, they have always been primarily marketed towards children – even cartoons popular in the ’90s, like “The Simpsons,” were always rated TV-PG. This all changed with the creation of  “Adult Swim” in 2001, a nighttime programming lineup for Cartoon Network. The starting lineup of “Adult Swim” were all PG-13+ rated cartoons. In their day, most of these shows were critically acclaimed however, over the years almost all of them have either reached their natural conclusion or been canceled, with two exceptions, by far the oldest of which is “The Venture Bros.”

“The Venture Bros.” was a revolutionary program in its time, putting a spin on classic tropes from American children’s cartoons and making an enjoyable and funny program that was still mature and occasionally thought-provoking.

First airing in 2003, “The Venture Bros.” aired its seventh and most recent season in 2018. After 17 years on the program, the show was dropped by Adult Swim in September 2020, but an HBO executive tweeted in November that the creators of the show were working with HBO Max on plans for a possible finale to the series.

The show follows Hank and Dean Venture, the Venture brothers, their father Dr. Venture, and their bodyguard Brock Samson. Dr. Venture is the son of Jonas Venture, a super scientist who dragged him across the world on his adventures much as Doc does with his own sons now. The show was originally intended to be a spoof on classic boy adventurer shows like “Jonny Quest.” It played off the fact that the seemingly carefree adventures of these young boys could actually have been highly traumatizing experiences. From this baseline the show quickly developed its own unique identity.

The show begins with everyone but the Venture’s and Brock being highly one-dimensional characters but, as it progresses side characters of little to no relevance become highly important, fleshed-out characters with their own plots. A great example of this is Dr. Venture’s nemesis, The Monarch, a butterfly-themed super villain intent on destroying Dr. Venture and everything he cares about. In the first episode he’s an ultra-cartoonish supervillian, single-minded in his quest to murder Dr. Venture. However, in the second episode, elements of his backstory are revealed that make him a much more appealing character. By the later seasons there are a number of side characters around The Monarch who are also relevant to the plot and The Monarch himself becomes, arguably, one of the most important characters in the show.

Creation of the finale is not certain — and even if it does come to fruition, production will likely take years if previous seasons of the show are any indication. Yet, there is still a real prospect of getting to see the end to this decade-spanning show within the next year or two.