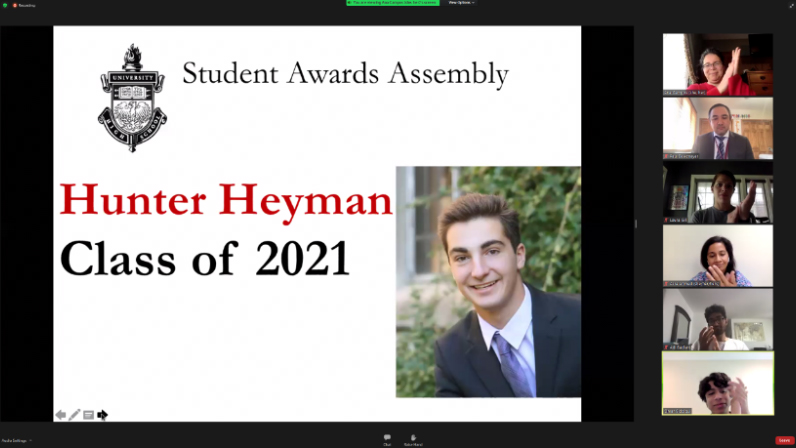 Members of the U-High community gathered on Zoom on May 26 to recognize achievement in service, citizenship, athletics and student organizations at the Student Awards Assembly.

Members of the U-High community gathered on Zoom on May 26 to recognize achievement in service, citizenship, athletics and student organizations at the Student Awards Assembly.

“We are all very proud of the entire community as we’ve worked through these past 12 months,” Mr. Beekmeyer said during the assembly.

Students were initially honored with individual awards such as the Citizenship Award, the U-High Service Award and memorial awards and were then honored with Principal Citation Awards for their involvement in student organizations.

Senior Jayne Crouthamel was honored with the U-High Service Award, the Brent Cawleti Award and the James Wherry-Willis 1987 Award. Additionally, she was recognized for her contributions as a peer leader in the “How to Help a Friend Zoom Assemblies” and as a member of the Students with Disabilities Association for their workshops for the Lab community.

“It means a lot to me to know that I have left this impact on Lab that would lead to me receiving all of those awards,” Jayne said. “Specifically, the award for the Students with Disabilities Association made me proud of our club as a whole to see that after only two- two and a half years, we have left an impact on the school that they think should be recognized.”

The assembly concluded with one student from each grade nominated for a Phoenix Award, a student determined award that recognizes students for their encouraging and generous personality. Natalie Hultquist was the junior class recipient.

“I was very surprised when I saw my face and heard my name,” Natalie said. “There were lots of other kids who deserve it, too, so I was honored that I was the one who was picked.”