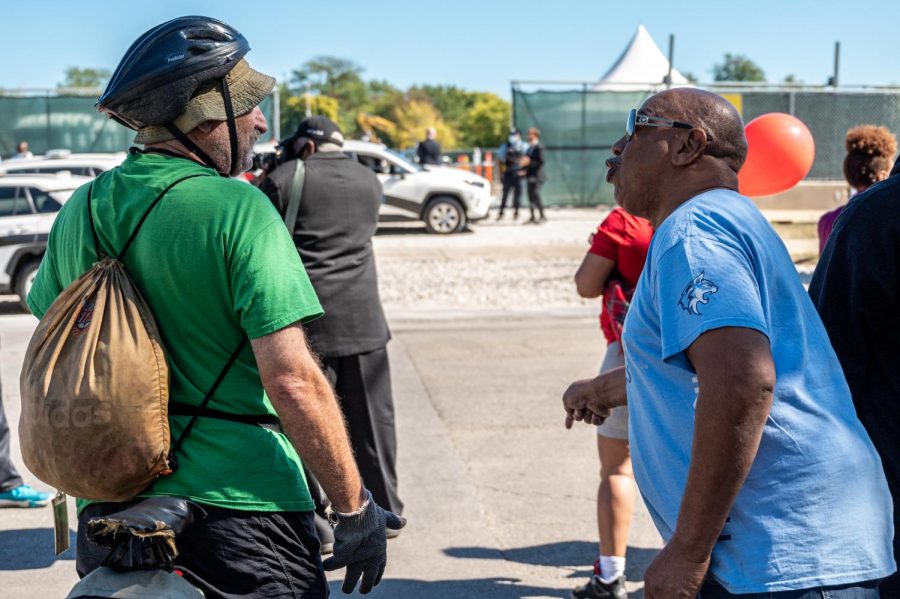 Onlookers at the Barack Obama Presidential Center's ceremonial groundbreaking that took place on Sept. 28 loudly argue about President Obama's impact, including the environmental affect of the center's construction.

After a nearly four-year-long federal review of the Barack Obama Presidential Center took place, construction began in August — just five blocks away from the Laboratory Schools campus in the Woodlawn neighborhood. A ceremonial groundbreaking took place Sept. 28. The construction comes with traffic jams, but it also comes at the tail end of a series of objections and lawsuits regarding the center’s location.

The Barack Obama Presidential Center is an architectural project overseen by the Obama Foundation and aimed to commemorate Barack Obama’s presidency. The center will be located in Jackson Park along Stony Island Avenue between 60th and 63rd streets. Included in the 19-acre facility will be a museum, plaza, women’s garden and wetland walk, activity center and a children’s play area.

The project is not set to be completed for another four years, and since construction began, many Lab students, such as senior Ashley Hannah, have noticed massive traffic jams on their way home from school.

“They’ve blocked off an entire street to build it, so for that reason, it’s definitely been something I’ve noticed,” Ashley said. “After school, the traffic is way worse than it was previously.”

Concerns about the Obama center reach far beyond traffic jams. Following the release of preliminary plans in 2017, many community members foresaw problems with the location of the center, worrying that the project could worsen gentrification in the area. In 2017, the Obama South Side Community Benefits Coalition, composed of 19 activist groups, sought a community benefits agreement that would require the Obama Foundation, along with the City of Chicago, to provide jobs for South Side residents, protect low-income housing rent from increasing, aid local schools, and support and create Black businesses.

Up to this day, the Obama Foundation has not fully agreed to a community benefits agreement. The foundation has shown dedication to community hiring. An estimated 28% of 4,945 short-term construction jobs and about 2,175 of the 2,536 long-term jobs for the Obama center will be given to South Side residents.

In July  2020, Mayor Lori Lightfoot and local Alderman Jeanette Taylor reached an agreement with the CBA Coalition on a compromise ordinance, assuring that 30% of units on 52 city-owned lots in Woodlawn would be reserved for residents making between 30% to 50% of the area’s median income. They also required that the city’s Department of Housing request $675,000 in federal funds to support a local program that will promote homeownership among current residents.

While much is still to be determined in the coming years of construction, senior Alma Moskowitz, a Hyde Park resident, is optimistic about moving forward.

“I’m looking forward to the library opening,” she said. “I think that the fact that the center is dedicated to hiring those in our community is a step in the right direction.”