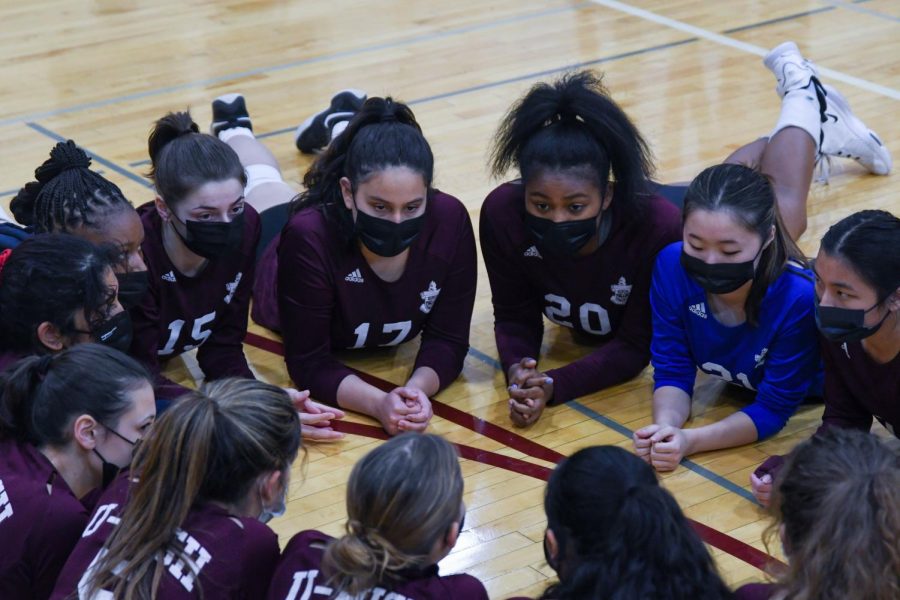 The volleyball team huddles together before a game on senior night on Oct. 21. The Maroons' finished their season winning the ISL conference and the regional championship.

Tied with Woodlands Academy 1-1 on Oct. 5, senior Sarah Solomon was tasked with serving the deciding point. That point was the one thing standing between the volleyball team and the ISL championship. After Sarah’s serve and a missed hit by the other team, U-High finished league games in first place with a 7-0 record.

This was the first time U-High won the ISL championship since 2004, and team members credit the victory to their strong team bonds and motivation to succeed. The volleyball team won the regional championship Oct. 28, but the season ended Nov. 1, when the team lost to Chicago Christian High School at the sectional game.

For team captain Ariana Vazquez, the shared desire for success and hours of practices made winning the ISL championship feel like the team accomplished their goal.

“Everyone ran to the center and it was just like the feeling of the pressure definitely released. You felt everything let go,” she said. “We were all genuinely so happy for each other. And just being there with each other made it that much more special.”

According to Ariana, last spring’s shortened season and the pandemic united the team and brought forward the significance of being together.

“I think all of us, as a whole, just really realized how much we love to do this,” Ariana said. “How much we love to be together, to play this sport together and we just gave it our all this year, and it turned out great.”

Juliana Walker, a ninth-grader on varsity, thinks the team’s collective motivation and drive to win was a key aspect to winning the ISL championship.

“Overall everyone kind of has that competitive aspect within them to want to win. I think that everyone was kind of on the same page for wanting to win the ISL,” Juliana said, adding that when the team became cohesive, they could achieve their goal.

Ariana was injured during the week of the final ISL game and said it was hard for her to watch the close game while not being able to play.

“Just the feeling of ‘What if we don’t win?’ Like, we put in so much work to get here, like, just that ‘What if?’” Ariana said. “I was genuinely terrified because I had never wanted something so bad in the moment and knowing that I couldn’t go out there to help our team.”

Sophomore Santana Romero said since the beginning of the season winning the ISL was the team’s main goal.

“That moment when we got that final point just to win, and it was a close game throughout all the sets. It was amazing,” Santana said. “Everyone ran onto the court. We got videos of all of us going into a huge huddle together. We were screaming and yelling and taking pictures, and it was just a really amazing moment.”

Ariana stated that team manager Kiran Chinniah brought food from Medici, and players ate and socialized before stepping onto the court.

For sophomore Ella Cohen-Richie, team bonds extend outside of practices and games.

“Just talking to people outside of volleyball. We all got really close just from talking to each other in the hallways and on the court as well,” she said. “I guess the more time you spend with the people, the greater bond you build.”

Throughout the season, the team utilized cohesion to raise money for breast cancer research during the annual Dig Pink game. The players also held senior night, which was emotional for everyone.

Ariana, who has been on the team for four years, realized how much she cares for her team.

“Seeing us all together crying, like, you know these girls,” Ariana said. “We all hold special places in our hearts for each other, and I think that was genuinely shown with how unified our team is.”