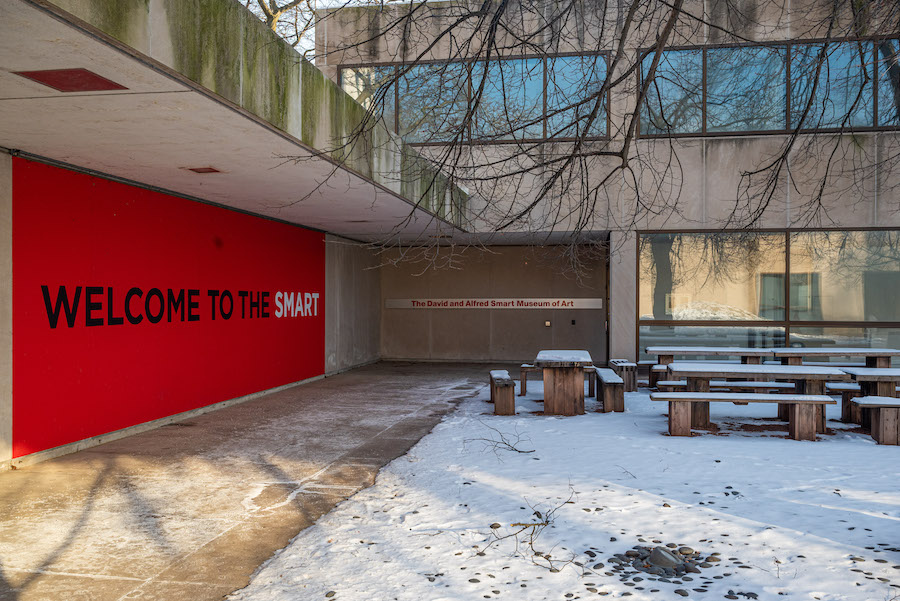 Walking into the Smart Museum lobby on Dec. 2, visitors stepped into an electric atmosphere. The normally formal space was transformed into a pop-up marketplace for Black-owned businesses as a part of their “Art, Activation, And Reflection: Black Wall Street Journey” event. The smell of catfish sliders and spicy chicken wings wafted through the gallery and over stalls where Black entrepreneurs from Da Book Joint, Blonde Co. and T’kor Couture displayed their merchandise.

After time for shopping and conversation, participants sat down in the gallery to watch University of Chicago researchers Ashley Truehart and Jennifer Etienne talk with artist Rick Lowe. They discussed racial economic disparities and the role of the art world in addressing racial inequality while surrounded by vibrant paintings, collages and photographs.

This event was a part of the recent effort in the Chicago arts community to elevate anti-racist efforts through artistic expression.

One of the Black-owned businesses featured at the event was T’kor Couture, a sustainable, luxury fashion brand that sells handmade crochet clothing. Dinah Clottey, founder and CEO of T’kor Couture, is a student at the University of Chicago.

“The Smart Museum event was so productive because they worked to directly feature people of color,” Ms. Clottey said. “The best way to be actively anti-racist really is to just uplift diverse voices.”

Ms. Clottey opened her business partly in response to the issues highlighted by the Black Lives Matter movement. Her bold bright style and strong message immediately resonated with people, and she attracted a following on social media where she posted her work.

“For me, 2020 was a depressing time, it was such a lonely time, and whenever I saw Black people in movies or even the news, it was always about the struggle, it’s always about the pain,” Ms. Clottey said. “I like using bright colors when I crochet, I want to amplify hope and happiness. It’s important to show Black people at our most joyful moments as well, surrounded by community.”

Many U-High students were also inspired by issues of racial inequality. U-High art teacher Brian Wildeman said he has seen a lot of student art inspired by personal struggle. A lot of this art references the Stop Asian Hate movement and the BLM movement.

“Adversity breeds a lot of great art,” Mr. Wildeman said. “I mean, coming back from online, I’ve seen so much incredible work from students because the pandemic and BLM just brought out so much strong emotion.”

The Smart Museum of Art regularly holds events that celebrate diverse artists, art with empowering messages, and meaningful art projects happening in Chicago. The Smart Museum is currently partnering with several art organizations on an exhibition called “Toward Common Cause: Art, Social Change, And The Macarthur Fellows Program At 40” that highlights several talented diverse artists who address important social issues through art.

The Art Institute of Chicago, one of the largest cultural resources in Chicago, has also been taking steps to use its position to support anti-racist efforts through art. In 2020, the Art Institute released a public commitment to racial justice and equity. Since then, The Art Institute has created a new division, People and Culture, which conducted a listening tour in six Chicago neighborhoods with a small number of museum visitors.

There are also groups focused on encouraging positive change. Enrich Chicago, a local nonprofit, has worked with over 50 arts and cultural organizations in attempts to highlight disproportional representation in Chicago’s artistic leaders.

Many other groups and cultural centers that have worked to address inequality in the art world and expressing activism through art.

Ms. Clottey expressed hope for the future of the Chicago art community, saying that art as a medium naturally brings people together and gives a voice to the voiceless.

“Chicago is very much known as being the ‘tale of two cities.’ So now the question is, ‘How do we get these two cities to combine into one? How do we get each other to listen to each others’ stories and really take them to heart?’” Ms. Clottey said. “I think art will be an important part of bridging the divide in Chicago.”