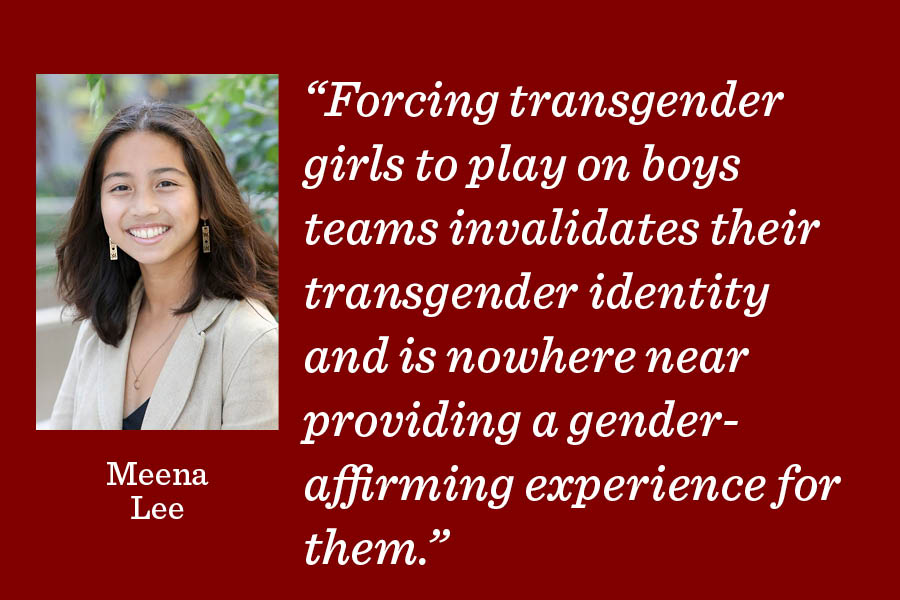 "Forcing transgender girls to play on boys teams invalidates their transgender identity and is nowhere near providing a gender-affirming experience for them," writes Sports and Leisure editor Meena Lee.

It’s a sunny day, a slight breeze blows, and the turf field I’m standing on is near perfection. The referee blows his whistle and the game is on. I’m transported to another world as my teammates and I execute crisp passes, our cleats flying and our encouraging voices floating through the air. As we continue to play great soccer together, I think about how lucky I am to be a part of this team of talented girls. I feel like I could take on the world.

This empowering feeling of being on a team is irreplaceable. Yet, across the country numerous bills are being considered that would rob transgender athletes, particularly trans girls, from this opportunity. According to the American Psychological Association, at least 36 states introduced anti-transgender student athlete bills since 2021. So far 10 states have enacted a variety of such legislation.

There is no reason to exclude transgender girls, especially at the middle and high school levels, from the incredibly valuable and rewarding experience of being on a girls sports team.

Some argue that transgender athletes can have the same team experience by participating on the teams that match the sex they were assigned at birth. However, forcing transgender girls to play on boys teams invalidates their transgender identity and is nowhere near providing a gender-affirming experience for them. If a transgender athlete does not feel validated on their team, it is unreasonable to believe it could be a safe, let alone empowering, environment for them.

Proponents of these bills claim that transgender girls have an advantage over their cisgender counterparts due to testosterone levels or other physiological differences. Not only have many of these scientific reasonings been proven false, this argument fails to recognize the varying levels of athletic ability that exist even among cisgender girls. Some girls may be taller or have a better ability to gain muscle mass, yet these advantages are perceived to be more “natural” or “normal” than any potential differences or advantages of a transgender girl.

This claim also fails to address the horrible discrimination that transgender youth often face. According to data from the Centers for Disease Control and Prevention and published by the Trevor Project, transgender youth have reported much higher rates of depression, victimization and suicidality than their cisgender peers. According to research from the National Center for Transgender Equality, 78% of transgender or gender-noncomforming students in grades K-12 reported harassment. Thus, it is both ignorant and hurtful to claim transgender athletes have an advantage by being transgender.

Finally, the NCAA and the International Olympic Committee both allow transgender athletes to participate on teams that match their gender identity, given that they follow certain rules and regulations about hormone levels. In contrast, bills that target transgender athletes in high school and middle school completely ban them from competing on a team that matches their gender identity. High school and middle school athletics should not be stricter than the most elite athletic organizations.

High school sports are more about promoting well-being, relationships with peers, learning social-emotional skills and just letting kids have fun. U-High’s no-cut policy demonstrates this philosophy perfectly. Every child should be given the opportunity to be a part of a team and feel invincible.