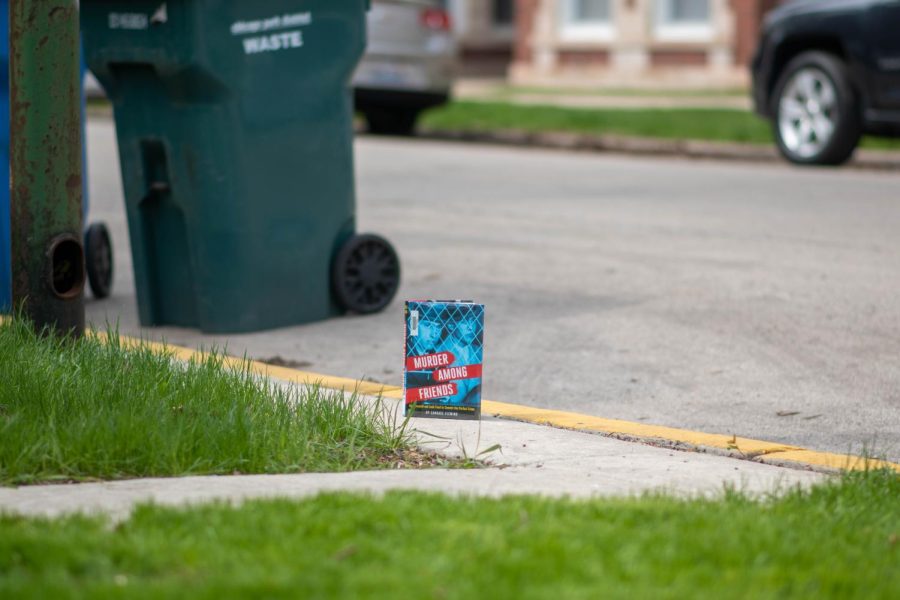 A copy of author Candace Fleming's “Murder's Among Friends: How Leopold and Loeb Tried to Commit the Perfect Crime” sits in the location where it all started: the streets in Hyde Park where 14-year-old Bobby Frank was taken over a century ago. The book compiles newspaper articles, court records and photos to create a narrative nonfiction account of the “Crime of the Century.”

Almost a century ago, two teenagers murdered a little boy on the South Side. Their reason: to see if they could get away with it. Nathan Leopold and Richard Loeb, both precocious and affluent, spent months planning their “perfect crime,” and on May 21, 1924, they drove through Kenwood and Hyde Park with all the materials needed to pull off murder — everything except a victim.

In “Murder Among Friends: How Leopold and Loeb Tried to Commit the Perfect Crime,” author Candace Fleming compiles newspaper articles, court records and photos to create a narrative nonfiction account of the “Crime of the Century.” Unlike other books on the case, Ms. Fleming’s is aimed toward young adults. It explores the unusual friendship between Leopold and Loeb, their reason for committing murder and the dramatic court case that followed. The case gained widespread attention, not only because of its shocking circumstances, but also because of lead counsel Clarence Darrow, his criticism of capital punishment and his use of extensive psychiatric testimony.

Though Ms. Fleming has been fascinated with true crime since she was a teenager, this is her first book about it. She writes primarily for young adults and recognizes that it can be hard to find the time to read.

“We don’t have time; we’re busy, we have lives. We have social media, you know, so how do books compete?” Ms. Fleming said. “I’ve been thinking about this a lot, and I’m thinking there are certain stories, certain genres, that I think teens would read if you do it right.”

To her, an interesting story is key to creating a compelling book. Part of what makes the pair’s story so riveting is how they are so relatable on some levels but extreme on others.

“Why did Richard Loeb and Nathan Leopold do this terrible thing? They had everything. Leopold is 19 but Richard is just 18, but these guys have already graduated from college because they’re so precocious. Their families are prominent families in Chicago. They have this unbelievable future ahead of them,” Ms. Fleming said. “And still they decide to do this thing. I don’t understand why, and I think that’s part of the obsession.”

The influence and wealth of the Leopold and Loeb families meant the case transcended stereotypes surrounding crimes. People started wondering if such crime was, in fact, not directly tied to socioeconomic class, and they became obsessed with the murder.

“In the 1920s, it became a national case because parents couldn’t figure out why, and they looked at their own children and went, ‘Is my child going to grow up to do something heinous like this?’” Ms. Fleming said.

The proximity of the murder, on the border of the Kenwood and Hyde Park neighborhoods, just minutes from the University of Chicago and Laboratory Schools, makes it especially intriguing for Chicagoans. Both Leopold and Loeb were students at the University of Chicago at the time of the murder, and Loeb also graduated from the Laboratory Schools. The kidnapping and murder of 14-year-old Bobby Franks occurred between 47th and 51st streets and Greenwood and Ellis avenues. Ms. Fleming, who lives near Chicago, actually viewed the area where the crime occurred.

“It’s a really intimate murder. I went out and counted steps — seriously, I walked it, and I counted steps — and it’s all within three blocks, four blocks,” Ms. Fleming said. “Then, you have the backdrop of Chicago. 1924 is wild and crazy. You don’t need a driver’s license to drive around, so they’re going to speakeasies, nightclubs and dancing all the time, and they’re rubbing elbows with gangsters. Chicago’s lawless, and the police aren’t particularly good at their jobs.”

Ms. Fleming wove together trial transcripts, psychology evaluations, newspaper articles and interviews from researchers into one coherent book. She kept copies of the materials, if possible, made notes at the top and then tossed them into one of two massive Tupperware bins.

“There’s absolutely no organization until I start to write, and I know that I have an unusual process because they’re long books. I always write my first drafts by hand with wide-line, loose-leaf paper and a big pen,” Ms. Fleming said. “I actually call it ‘dumping down’ because eventually I’ve done enough research, I know the story — at least, I know the story the way I want to tell it.”

Then, she just wrote. When she needed a date or description she didn’t remember, she simply left a space in the manuscript and found that fact later.

“I’ll leave a big old line in the middle of the manuscript, so if you look at my first drafts, they have giant holes. When I’m doing that first draft is really just trying to find the story’s flow and the story’s pace and its organization,” Ms. Fleming said. “I know that I can dig back through my bins and find the perfect quote; oftentimes, I will remember, which always amazes me.”

At the heart of Ms. Fleming’s research is her love for true crime and the Loeb and Leopold case. When she was 14, she visited the Chicago Historical Society (now the Chicago History Museum) and was fascinated by their story.

“That was the first time I discovered the story, and they had out artifacts, like they have those glasses that Nathan left where they dumped the body,” Ms. Fleming said. “I remember being utterly compelled by the story then…. After two years of working on that book, I am still completely obsessed.”