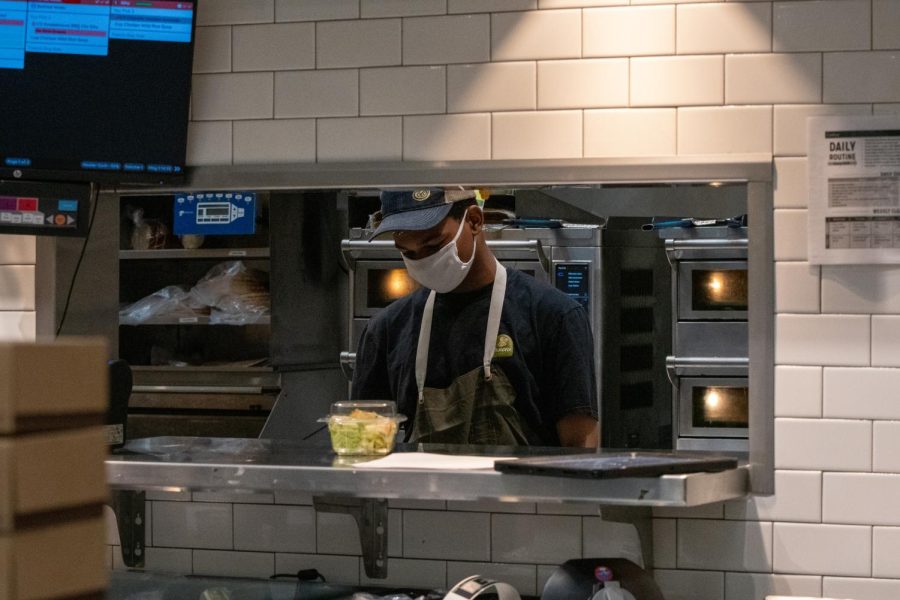 Junior Michael Ewing opted to work part-time at Panera during the pandemic. Working during the school year forces some students to find a balance between work and school.

A carton of eggs, a gallon of milk, a bag of apples and a loaf of bread are items Graham Robbins is all too familiar with. He’s scanned and bagged them thousands of times in the two and a half years he’s spent working at his local grocery store, Grand Food Center in north suburban Glencoe. Despite the changes to his surroundings and himself, his part-time job has remained a constant in his life as he juggles schoolwork, sports and extracurriculars for his biweekly paycheck.

Graham is just one of several U-High students who found and maintained a job to invest, save and gain financial independence.

As the effects of the pandemic on society have eased, the job market steadily began to recover, so much so that 11.3 million jobs needed to be filled in February, according to the U.S. Bureau of Labor Statistics.

Junior Michael Ewing is employed part-time at Panera. He said that although the slowing of the pandemic allowed him more opportunity to get a job, it wasn’t the reason why he got a job.

“The dying down of the pandemic allowed me to go outside more, meaning that my family was more comfortable being exposed to potential risks, but I still would have wanted a job anyways,” he said.

Senior Ashley Hannah said the current job market contributed to her ability to get a job recently at Trader Joe’s.

She said, “I think [the labor shortage] was helpful for me because when I applied, there were  people quitting and there were openings they needed people for.”

Graham, a junior, started working at Grand Food Center before the pandemic. He said that the workplace environment has changed in the past two years due to the effects of the pandemic.

“From ninth grade year to now it’s definitely changed. Obviously there’s a national labor shortage now,” he said. “The store’s struggling to get people now. Before the pandemic, we had maybe 25 front-end staff, and now we have maybe eight.”

The primary benefit for working teens is financial, whether saving for college, investing or just spending money.

For Graham, the financial benefit from his job gives him short and long-term independence. He said he saves a portion of his earnings.

He said, “I save most of my money, not for any particular purpose.”

Graham invests the rest of his money. He said that he takes a backseat approach to investing.

He said, “I don’t spend much time watching individual stocks but I do mutual funds.”

Ashley said she uses most of her money for spending but wants to learn to invest.

“If I wanna buy clothes or go out or buy gas for the car, which has gotten a lot more expensive recently, I have to make money to be able to do that,” she said. “I don’t invest, but I hopefully will start soon with the help of my step-dad.”

Junior Jackie Slimmon, a hostess at the Willow Room restaurant in Lincoln Park, got a job for the experience and also for the financial benefit. She said she saves some of her money and also spends some.

“I’m definitely saving my money, but also I get to go shopping more. I’m just really happy to be getting paid because I feel more free,” she said. “The money that I spend from what I make goes towards things like going out to eat, shopping and movies.”

Other students care less about the financial benefit and choose to work to gain experience or to pursue something that they are passionate about.

Junior William Kraemer worked as a sailing instructor at Geneva Lake Sailing School in Wisconsin over the summer. He said his motivation for a job was less from a financial standpoint and more from one of passion and learning.

“I love the place I worked at because I grew up sailing there and I really loved the instructors that taught me,” he said. “I learned a lot about what it takes to lead and to teach.”

For students working during the school year, balancing school, extracurriculars and a part time job can be a struggle to balance.

Jackie said she had to adjust her work schedule to make time for her schoolwork and sports practices.

“Now, I’m only working Sunday nights because I have soccer after school, so I couldn’t make it to work, and I just have a lot going on so I just want to keep it to one shift on the weekends,” she said.

Graham said he had to sacrifice sports practices and games to fulfill his commitment to his job.

He said, “There’s awkward moments when we’ll have weekend practices or games and I’ll be scheduled to work, and even though I really value my team, you can’t really call off to work.”

Even with the stress of the school year beginning and ending, sports games won and lost, global issues intensifying and diminishing, the familiar beep of the barcode scanner and rustle of crinkling plastic bags have remained a large part of Graham and other working students’ lives.