Adoption should not be considered a panacea to abortion 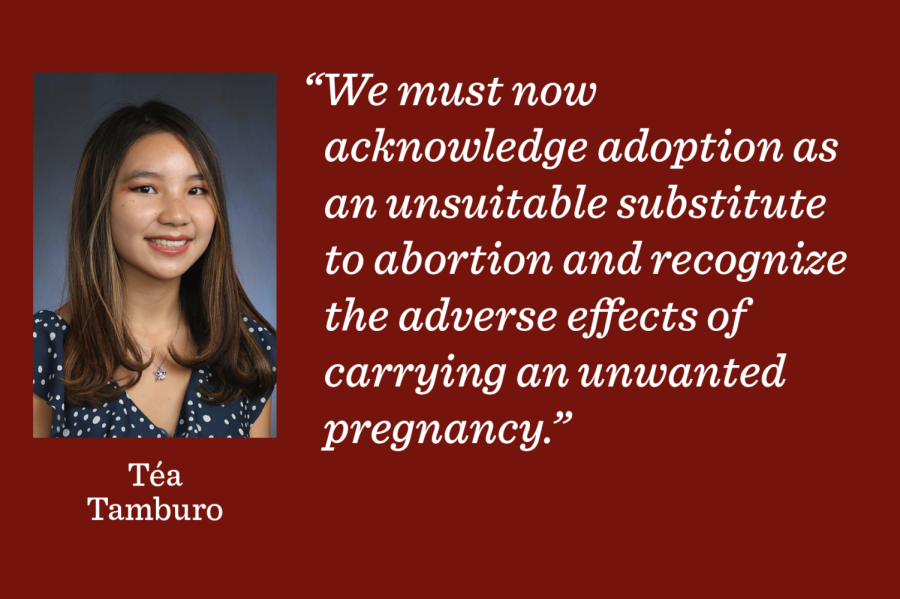 Editor-in-Chief Téa Tamburo argues that abortion must be looked at through a lens of accessibility and mental health, and that adoption should not be viewed as an alternative for those who want abortions.

From the late 1970s to 2016, the Chinese government enforced a strict one-child policy that prohibited people from having more than one child. This led to unsafe abortions and thousands of children left at orphanages. Often, I think about this and wonder what would have been if my birth mother had the power to choose her reproductive measures.

Now, the power of choice is uncertain in the United States. The ruling in Dobbs vs. Jackson Women’s Health will determine the legality of Mississippi’s ban on abortion after 15 weeks gestation and potentially overturn Roe vs. Wade. The speculation has sparked political demonstrations throughout the nation.

During the 2020 Supreme Court confirmation hearing, Amy Coney Barrett supported her pro-life stance, citing adoption as a substitute for abortion. Although this didn’t cause a widespread stir during the hearing, we cannot forget this remark. Rather, we must now acknowledge adoption as an unsuitable substitute to abortion and recognize the adverse effects of carrying an unwanted pregnancy.

Leaving it to states to decide their abortion laws makes abortion and prenatal care less accessible to rural parts of the country. Federally overturning the right to choice overlooks the health complications people face when carrying any pregnancy to term. The United States’ maternal mortality rate has been rising, with 23.8 deaths per 100,000 live births, according to a 2022 Centers for Disease Control and Prevention study, currently the highest mortality rate among developed nations.

Disregarding maternal health would result in an increased maternal death rate. Not only would people be forced to carry a child to term, despite any health complications, they may resort to less-safe termination methods, depending on their geographic location. Even if they carry the pregnancy to term, they may not have the resources to adequately raise a child.

For years, there have been conversations about whether adoption is a panacea to abortion for those who don’t want to or cannot raise a child. While adoption provides children with a family, viewing it as a replacement to abortion overlooks the emotional trauma the birth parent would face. Claiming adoption as a viable substitute automatically assumes people that choose the former can effectively side step all parental challenges. However, these people still become parents — they just don’t raise the child. This overlooks the trauma and grief birth parents are shown to feel in a society that views adoption through a savior complex.

According to many reproductive justice advocates, carrying an undesired pregnancy to term irrevocably alters the path of a person’s life. Banning abortion takes the power to decide that path from the people and gives it to the state governments, and the option of adoption does nothing to change that. This power of federal choice is up for serious question, with a decision expected this month. To protect this right, we must actively advocate in the reproductive health and equity movement to prevail in the struggle for reproductive justice.