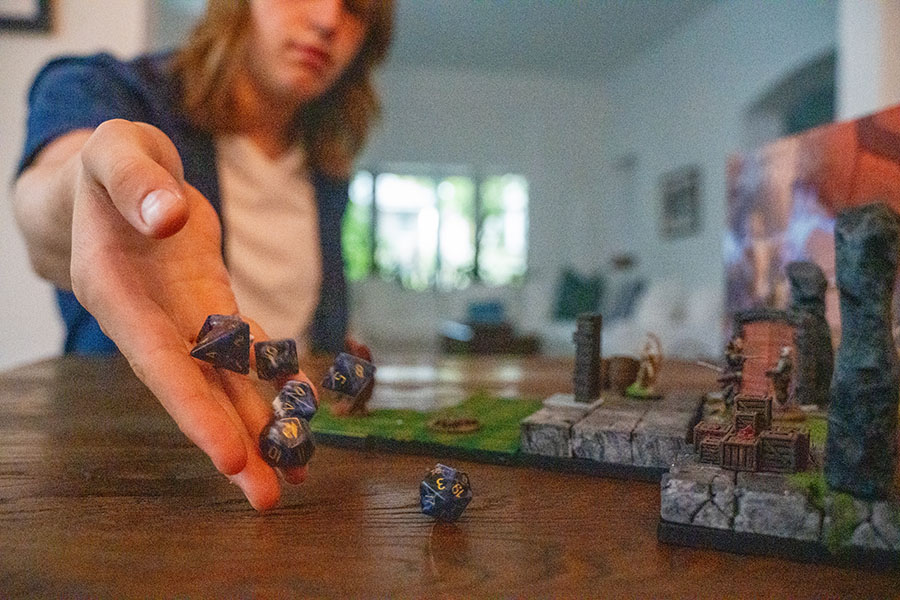 Dungeon Master Joe Bremer rolls the dice he uses to run his game of Dungeons and Dragons.

A die clatters on a tabletop. Players hold their breath as numbers flicker across it, cheering when it stills: the wizard’s player rolled a high enough score to beat a hag! Someone clears their throat and begins to describe the mysterious opening that the hag guarded. Spread over multiple game sessions, a full Dungeons & Dragons campaign can take years.

Although the fantasy role-playing game Dungeons & Dragons was first released in 1974, U-High students continue to bond through it decades later.

Senior Joe Bremer began playing when his older brother, then in high school, started a campaign with him. Joe doesn’t remember if they started while he was in middle school or lower school, but he recalls wanting to play with his brother.

“I wanted to be a part of it, because I saw him doing it, having fun with it,” Joe said, “but at that point, I was playing as a player.”

Today, Joe is the dungeon master (DM) for his seven-person campaign of U-High Students and builds the world in which six others will explore through his storytelling, their characters and dice rolls. He enjoys how the game brings people together.

“The way I talk about D&D is it’s a rule book full of excuses for a bunch of grown people to play pretend,” he said. “And that’s my favorite part about it — it’s making a world, it’s inhabiting characters, making a story and basically working on having a collaborative storytelling experience with a couple of your friends.”

For worldbuilding, Joe has many options.

“Anything from writing specific speeches for specific characters, making new characters, figuring out the world, maybe designing a dungeon, like challenges, monsters, whatever that the players will run into,” Joe said. “Usually, I try not to plan the actual beat-to-beat events of the session because you want players to have some agency. I plan out what they could run into, what I sort of want to happen, and like, basically trying to make cool moments that they can run into.”

After discussing the role with his friends, Joe has been the “forever DM” for his current campaign, which started three years ago, although players can choose to switch off the role of DM within campaigns. Since the start of high school, Joe has met with his friends for their campaign about once a week during the school year, for two to eight hours each time.

As dungeon master, though, he also prepares game pieces between sessions.

“I use miniatures in my games, so that also involves painting all of those and doing a little bit of foam sculpting,” Joe said. “And then I usually have set dressing for when I’m running a campaign, so I’ll have in front of the DM screen a bunch of little books and lights and stuff like that.”

Jay Molony, a senior, plays the role of a cleric in Joe’s campaign. His downtime between playing sessions is different from Joe’s.

“Usually I don’t have to plan stuff. What we will do, sometimes, outside of sessions is if we level up, I’ll do that outside,” he said, “just like making sure I’ve updated all the stats and gotten new spells and stuff.”

His role as a cleric is to heal the other players, which he says affects his play style.

“I stay back; I’m just less aggressive,” Jay said. “I also sit there and make fun of people outside of combat, and just every time I disagree, bring up funny moments.”

Although Aaron still loves worldbuilding, their favorite part about the role-playing game is how much agency players have.

“There’s something just so different and organic of playing D&D in a world because it’s all, technically speaking, improvised, right?” Aaron said. “The things that happened in that world aren’t things I think, ‘Oh, that’d be interesting,’ [and] I write down; it’s the players making a choice.”

Although the players choose their own paths, the stage is set by the dungeon master, who can steer the story to be as lighthearted or dark as they see fit.

“I’m also excited to just destroy my characters and my players emotionally,” Aaron said, joking about the fantasy. “They’ve already made some backstories that are rife with places for me to just kill them so much.”