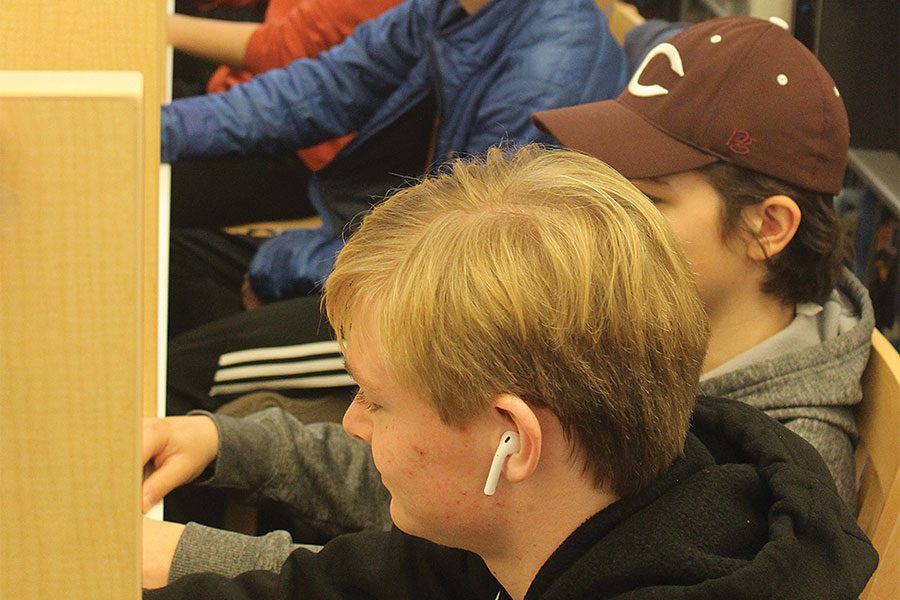 It’s 10:10 a.m. on a Tuesday, and students flow into the Pritzker Traubert Family Library for their free period. They scan the room for a spot to sit, but every seat at every table — both conference rooms, all the computers and all the beanbags — already have someone sitting in them. One student sees a friend scrunched between two shelves and goes to join him, but other students go back out the same doors. They’ll have to find a quiet space somewhere else.

The overcrowded library not only affects the students trying to study, but it has put a lot of stress on librarians Susan Augustine and Shirley Volk, who are trying to adapt to the crowds, according to Ms. Augustine. They have added bean bags for people to sit on and have repealed old rules about not sitting on the floors or between stacks. She said it’s not uncommon to see more than 100 people in the library during Tuesday free periods.

Ms. Augustine said it’s nearly impossible to keep the library a quiet place when it’s packed with more than 100 students.

“We don’t want to have to be the disciplinarians,” she said. “It makes us feel like we can’t give as much attention as we want towards helping students if we are constantly trying to keep the noise down.”

Although the librarians have opened up the library classrooms as additional workspace, the library is still often operating at overcapacity. Despite this, students continue to fill every corner there since the school lacks other designated silent work spaces.

“I’m upset there’s not more quiet spaces for students to work,” Ms. Augustine said. She would like to see a quiet work space that’s not in the library, so students don’t feel as cramped. She said students deserve to have a place designated for doing work.

The library crowding is a problem that will only increase in coming years.

“As the student body expands, everything is going to be affected,” Ms. Augustine said.

Next year high school enrollment will reach the target of about 600 students, nearly 100 more than at the start of the expansion.

With no plans to ease the overcrowding of the library, Ms. Augustine said she and fellow library staff members are not sure what they are going to do.

Ms. Augustine said, “We are nervous about next year.”

Junior Emily He has been going to the library throughout this year and has both seen and heard the crowds.

With the crowds and the noise, Emily is less enthusiastic about going there at all.

“I’ve found that recently I’ve been spending less and less time in the library,” she said. “In the beginning of the year the library was not as crowded as it now, and I would go there every time I had a free period. But nowadays I feel like I’m just in the search of a new cubbyhole to do my work in instead of the library.”