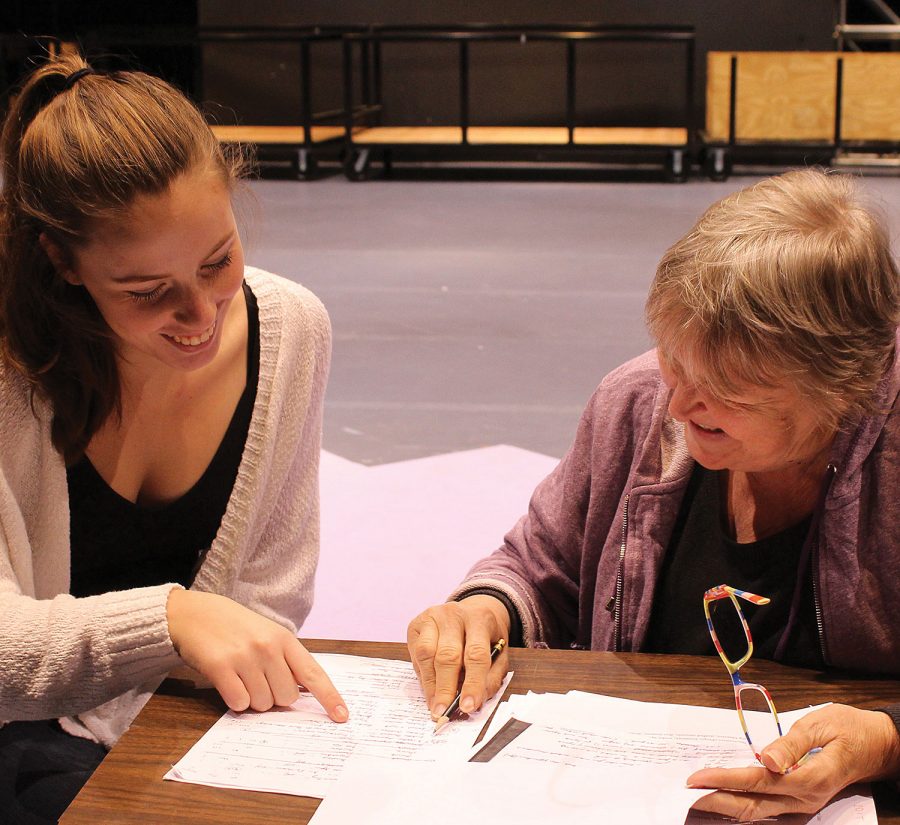 Every year, nervous newcomers wander into the Sherry Lansing Theater. While some are unfazed by the culture of the stage, others are uncertain, bewildered by the lights and lingo.

Three years ago, Riley Kay was among the arrivals. Brought along by a more experienced friend, she was shy and unfamiliar with the people and the art. But the thrill of participating in productions stuck and grew, right alongside a close, dependable relationship with her drama teacher and director, Liucija Ambrosini.

Throughout high school, Riley has worked her way from acting to tech crews, and now, as a senior, to theater manager.

“I still act, but working on crews and working in tech theater, which is off stage, it definitely helped me develop my relationship with her because you have to one-on-one work with her a lot,” Riley said. “After spending a lot of time with her, I can have a really genuine conversation with her. I understand her and I understand why she gets frustrated.”

Mrs. Ambrosini said this close work helps her and Riley be effective directors and build a familiar, adept team.

“When students have been working on theater projects over and over again, by the time they’re juniors and seniors there’s certainly a friendship and a collegial kind of aspect to it because we’re all in it together.”

But in their countless hours of sitting side by side, cultivating the production to opening night, the pair talk about much more than music, sets, acting and their individual visions.

“She’s helped me talk through some life stuff and get comfortable with it. I’m joining the Israeli army next year, so I’ve been having a lot of nerves about that,” Riley said. “I can talk to her about that, and understand that there’s not just one path for everyone.”

Mrs. Ambrosini said even though she is a mentor in some ways, she relies on Riley’s input too, and appreciates their shared dedication.

“We’re both hard workers, I think,” Mrs. Ambrosini said. “She’s the one I rely on to get a hold of everybody when I need them. That makes me respect her and like her a lot.”

Mrs. Ambrosini said she’s grateful for Riley’s role as a student and manager, but said their relationship might not be as strong if they had met in another environment. Theater has more dimensions than a one-way traditional classroom, which Mrs. Ambrosini said brings her and her students together.

“I feel if they’re deeply involved in theater, it helps me reimagine things or reconstitute my idea of how to approach something,” she said. “That’s what a student like Riley brings out for me, because I try to see where their excellence lies and what they can bring to it.”