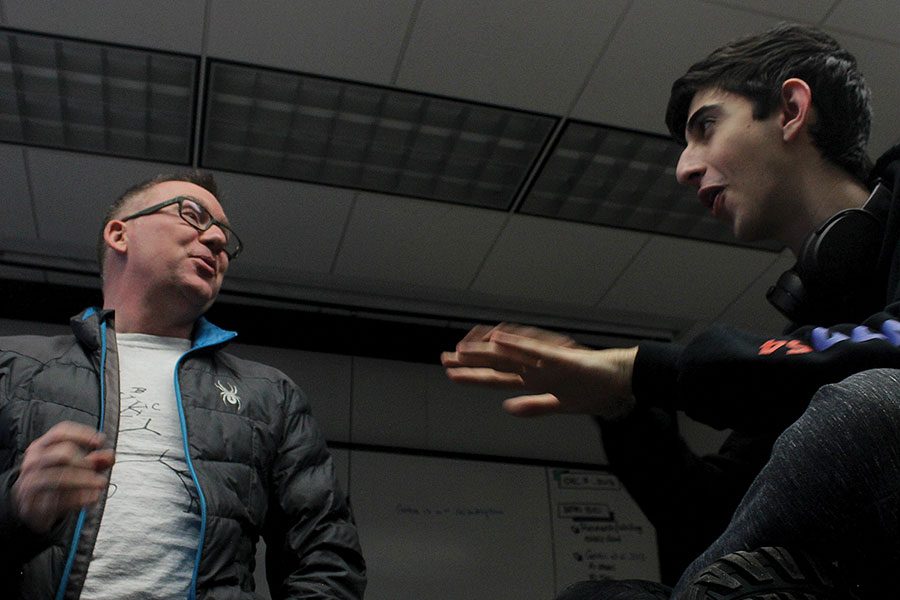 Since his first teaching job, Daniel Jones hasn’t been afraid to set boundaries, but he does it without being too authoritarian. He knew he had a bond with one particular student, Nick, who he called a troublemaker, when Nick’s mom called Mr. Jones one night at 8:30.

“I get this call, and mom’s on the phone. ‘Nick has locked himself in his room, and he’s screaming and yelling obscenities at us,’” Mr. Jones recounted. “I can hear him in the background — he’s yelling obscenities at his mom and dad. ‘He’s acting up, he won’t do his homework, and the only reason why I called you is that he actually yelled at one point through the door, I won’t come out and speak to any of you ever again unless you call Mr. Jones.’”

Upon hearing Mr. Jones’ voice on the phone, Nick emerged from the bedroom.

In his two decades of teaching, including more than 14 at Lab, dozens of friendships followed.

One especially strong relationship is with Bassem Noghnogh, a senior.

To Bassem, Mr. Jones is a role model and authority figure but also a friend — someone like him he can look up to.

Mr. Jones said during lectures he shares anecdotes about his life to show students more about himself and that he’s open to talk after class. Student relationships have become an integral part of his teaching philosophy.

Mr. Jones said he has stayed at Lab because a solid group of teachers care deeply about the well-being of their students. Bassem agrees — teachers are such a regular part of their students’ lives that it doesn’t make sense for their relationship to be limited to class instruction.

Mr. Jones, the faculty adviser for Spectrum, said he remembered his friendship with Bassem originating with meetings of the LGBTQ+ alliance.

“He’s just kind of a rambler,” Mr. Jones said about Bassem. “He just rambles and I just took it upon myself to go ‘Done — you’ve made a statement, let’s move on and deal with it.’ He’s like, ‘Wait I have three more —’  ‘Yes. Stick with one and we’ll deal with them one at a time.’ I took it upon myself to keep him from rambling. And that developed into a funny, kind of jovial, kind of teasing relationship.”

Over the years, Mr. Jones said Bassem has become less of a rambler. Now he’s the president of Spectrum.

Bassem said he likes talking to teachers in general because they have the perspective that comes with decades of life experience. He said he looks up to Mr. Jones in particular because they’ve encountered similar obstacles, and Mr. Jones has made it through.

According to Bassem, their friendship revolves around banter, especially sarcasm. He might drop by the science office to check in and see what Mr. Jones is listening to so he can playfully insult it.

But sometimes scary things happen, and Bassem knows he can turn to Mr. Jones.

Over the summer, he said he called Mr. Jones in a panic. Bassem had a health scare and didn’t know what to do. The two talked it through and developed a plan.

“The fact that he’s gay makes it so that I can trust him with the feelings I wouldn’t tell to a straight person,” Bassem said. “We’re part of the same club, and I feel like that means I can talk to him about my problems.”