Turn it up — get moving

During practice and competition, fun, upbeat “hype music” gets fans and athletes invested in the game 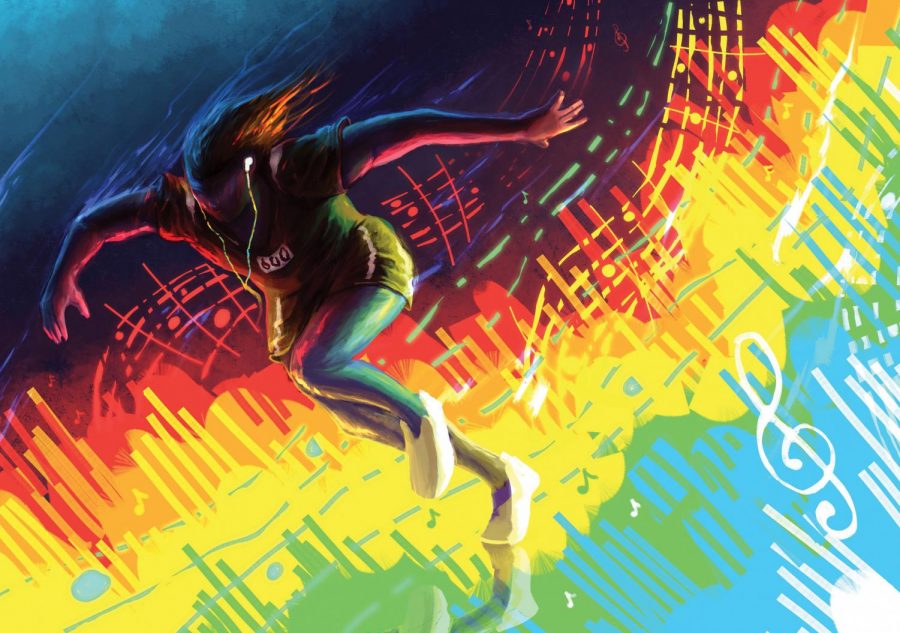 Entering Upper Kovler Gymnasium, the scene is chaotic. Students sit in the bleachers, talking and laughing, nodding their heads to the loud rap music playing over the speakers. The whistle blows and the game begins.

Whether they’re getting ready for the game or trying to hype the crowd, athletes on many school sports teams listen to music during warm-ups and practices.

“Personally, I have specific playlists to get me amped up,” Donna Tong, a swimmer, said. “I listen to them before the race because you know we’re in the water, so we can listen to them while warming up.”

Many teams find that music helps create community, both within the team and between teams.

“Sometimes we listen to music in the locker rooms with other teams,” Donna, who likes the trucker style of country music, said. “Sportsmanship is big in the swim community.”

Donna described how in the summer the swimmers run to Promontory Point and then swim a mile. “We blast music through the whole run, so it’s pretty fun.”

To Donna, music is really personal. “I have some songs that will really remind me of my passion for swimming, but it’s also something that really brings the team together on bus rides, parties, practices — literally everywhere we go.”

Alex Stevanovich, a runner on the cross country team, said singing along to music on bus rides “fosters more of a sense of community and makes everyone want to work harder, so the team isn’t let down.”

According to Alex, cross country teams are not allowed to listen to music during their races.

“That being said, I often pick a song before a race to sing on repeat in my head to help pace myself and to keep thoughts of wanting to quit out of my mind,” Alex said.

It’s not just athletes who use music to set the tone. As announcers, Marisa McGehee and Loren Pope play music and announce games in the gym.

“At the beginning, the basketball teams were kind of wary of having us at the games just because it might distract from the play or something,” Marisa said, “but now at least I think it really gets them hyped up. It’s kind of like we are part of the whole experience now.”

According to volleyball player Sydney Rogers, music is an important method of getting the crowd engaged.

“Sometimes volleyball can get a little boring, especially if we’re not playing well,” Sydney said. “I think it gets them more involved like cheering and excited. We definitely play way better when the fans are cheering.”

Every season a soccer player is in charge of the music, and this year the job went to captain Jamie Miller.

Jamie said during bus rides he usually would just play popular rap music. However, when the team would get 15 minutes from the destination he would play a set list of six songs where everybody knew all the words.

“We all get up and shake the bus dancing and singing the words together,” Jamie said. “The main song was ‘Surfin’ by Kid Cudi last year and that was because when we randomly played it over that summer and Coach Potter started dancing to it, which was funny,” Jamie said.

According to Jamie, teams also use music to intimidate the other team. “It’s always intimidating when you see a bus coming in jamming out to ‘One Kiss’ by Calvin Harris and ‘Mo Bamba’ with the whole bus shaking and the whole team screaming at the top of their lungs.”