As the hit show wraps up, students and fans react to the final twists 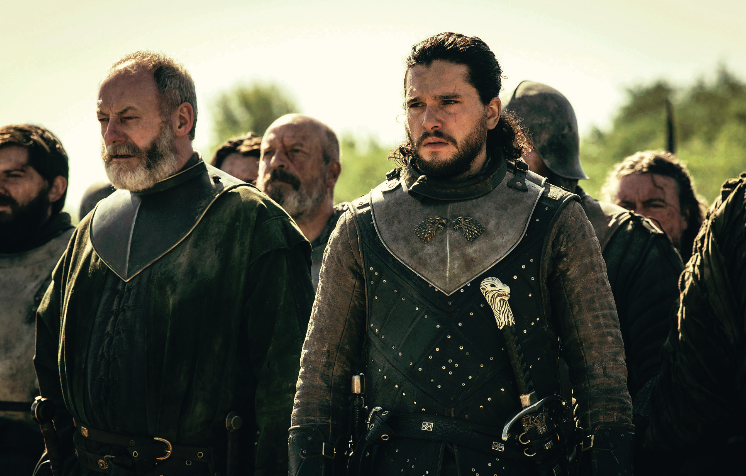 FINAL MOMENTS. Ser Davos Seaworth (Liam Cunningham) and Jon Snow (Kit Harrington) look upon the battle eld with their army at their back. Both characters have been in the “Game of Thrones” series since its first season. The cultural phenomenon’s eighth and final season concludes May 19.

Armies, leaders and dragons. These have been on the minds of fans of the cultural phenomenon that is “Game of Thrones” during its final season, which premiered April 14. According to CNBC, 17.4 million people tuned in.

The HBO show has been applauded by its fans for satisfying character development, intense drama and intricate storylines. Viewers started the seson anticipating who would prevail in the “Game of Thrones” —  Cersei Lannister, who started the season on the throne; Jon Snow, king in the North; or Daenerys Targaryen, the dragon queen.

However, with the show’s reputation for throwing the audience curveballs, someone completely unexpected could end up winning. After all, even after years of character development, you never know when a main character will be killed off. The first episodes of Season 8  addressed some of the show’s main plot lines, building tension for the finale.

In the penultimate episode May 12, the capital city, King’s Landing, was burnt to the ground by Daenerys’ forces. Fans are now more perplexed. By the May 19 finale, viewers will know who ends up  on the Iron Throne and wins the “Game of Thrones.”

Junior Eve Grobman got reeled into the show when it started gaining a lot of hype. She has been watching the show since its fifth season, but binge-watched Seasons 1-4 before beginning.

Before she started watching the show, she had read the first three books of the “A Song of Ice and Fire” series by George R.R. Martin, on which “Game of Thrones” is based.

Although Eve usually watches each new episode by herself, she enjoys discussing it with her friends the next day to debrief.

“As it comes into its final season, all of us are on the edge of our seats,” she said. “All these things could happen, and after we have been following it for so long we are so anxious to see how it will end. And, while all these big things keep happening this season, one of the first things you want to do is tell someone about how crazy it was or your reactions.”

She explained that this season each episode is important, so discussing the “OMG moments” helps process the show.

Stanley Shapiro has also watched the show since Season 5. He watches and debriefs with his dad.

“It’s always fun to talk with him after something major happens in an episode,” Stanley said. “After the episode we will predict what we think is going to happen. We are usually totally wrong about what’s actually going happen, but it’s always fun to discuss what you think.”

Stanley, a junior, started watching “Game of Thrones” at the beginning of his freshman year of high school. He initially started watching after hearing about it on the internet and in news articles.

He said “I didn’t know much about it and actually thought it was kinda weird, but as I got older I started seeing more references and that got me into the show.”

Eve is not surprised that the show’s following has grown as big as it has. She said it’s gained such a large following since it has something for everyone.

“It includes everything we want to see. It has really interesting characters, it’s got gore, and you never know what’s going to happen,” she said. “I think the broadness of the world as a whole attracts a lot of people who like fantasy or like seeing big battles or like seeing real characters and deep character dramas and development.”

Even though there will not be any new episodes of “Game of Thrones” coming out, that doesn’t mean Eve is done with the show.

“Once I finish it, immediately after I’m going to take a break just to process it,” she said, “but after a few years I see myself coming back and rewatching the whole show in its entirety.”

Although Eve is excited to see the last episode, it is bittersweet for her.

“It’ll be nice to see the end since it’s the end of such a big story and everyone wants to know what happens,” she said, “and I think at some point there is a right time for everything to end.”