Rites of May offers community, chance for fun 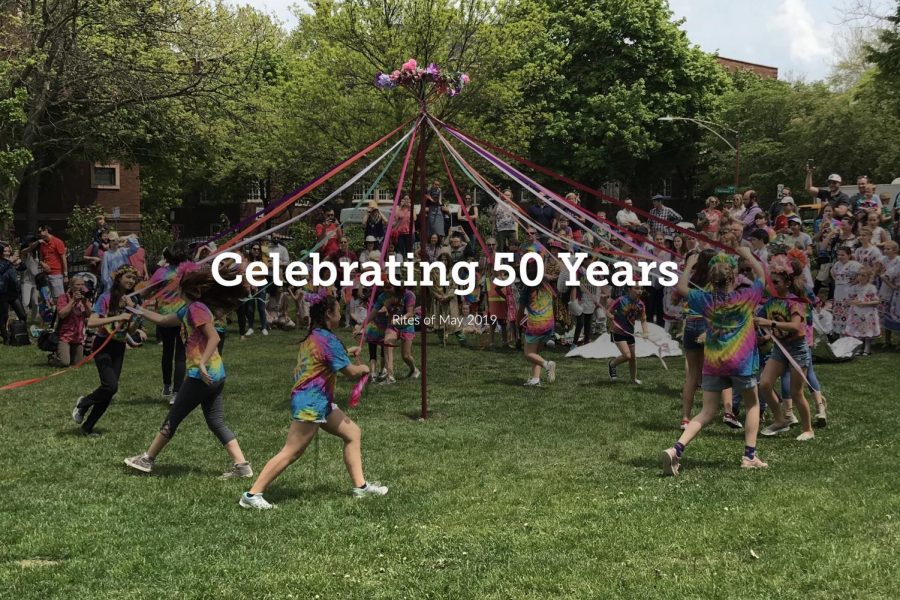 Students play at one of the many activities offered at the 50th annual Rites of May celebration. A community gathering that takes place every year, students, teachers and parents all help to organize and set it up.

Students played in inflatables, explored international booths and tried foods from various cultures during the 50th anniversary celebration of Rites of May on May 18 in the historic campus. The event was scheduled from 11 a.m. to 4 p.m., and attendees enjoyed clear skies and sunshine until the last hour.

N-2 Principal Carla Young is retiring this year, and she was honored as grand marshal of the parade. The “Marching Maroons,” a group of volunteer freshmen students with music teachers Bradley Brickner and Ryan Hudec, led the parade playing trumpets, drums, saxophones and flutes. According to parade organizer Tria Smith, the theme of the parade costumes was “bloom.” After the parade ended at Scammon Garden, Ms. Young was given a shawl. Faculty and a group of students from Artsfest made contributions to the shawl, according to Ms. Smith.

The event was organized by eight parents who are part of the Parents’ Association.

During the Maypole dance, the “Marching Maroons” played “Theme from Brahms Symphony No. 2.” According to event organizer Barbara Kern, the maypole is a permanent addition to Scammon Garden.

Ms. Kern said that the eight parents who organized the event hoped for mass numbers of U-High Students to come to the Rites of May.

Sana has volunteered at Rites of May for several years, and she said, “Being here really instills a sense of community, and I love how close the Lab School gets.”

In addition to exploring booths and trying foods, attendees watched performances. Accompanied by pianist Dhilanthi Fernando, the lower school choir performed “Gallop,” “A Child of Song,” “This Little Light of Mine” and “The Song on One Note.” Freshman Suhail Couto played his electric guitar to conclude the lineup of performances.

This year’s T-shirt was designed by fifth graders Spencer Davis and Asher Dennis. According to Spencer, they were inspired by Universal Studios.

History of Rites of May

Since its inception in 1969, the Rites of May has been an all-school event for the community to come together, learn about each other and have fun.

It began as a three-day event lasting from Thursday to Saturday in the courtyard. Attendees explored booths featuring foods and activities from various cultures, played games, watched performances and participated in the Maypole dance. The outdoor spring play, the highlight of the festival, began in the evening. The plays spanned a wide range of genres including Shakespeare, comedy, modern and musicals.

Drama teacher Liucija Ambrosini, who has taught at U-High since 1970, said that various alumni have told her that the experience of performing outside was “magical.”

Being involved in the Rites of May used to be an expectation, according to history teacher Susan Shapiro. U-High students and faculty ran, set up and organized the entire festival. Gradually, U-High students became less involved due to the increasing workload, and parents assumed the role of the faculty.

Unexpected weather during the Rites of May is often prominent in people’s memories, and it is termed “Rites of May weather,” according to N-2 Principal Carla Young. Ms. Young said she remembers people coming to the play with their sleeping bags, down jackets and blankets. Sometimes, everything moved inside due to rain, and the food was cooked and handed through the windows.

Even in rainy, chilly or other forms of unexpected weather, Ms. Young said, “It was lots of fun. The courtyard would be filled with the smell of barbecue, and kids would be playing games and having a great time.”

Student-designed Rites of May T-shirts were added relatively recently and bring pride to the festival, according to N-2 Dean of Students Sarah Abella, a Lab Schools alumna.

The Rites of May tradition nearly ended at various points in its history, but it did not and according to event organizer Lynn Sasamoto, a recent high of around 1,300 people attended last year.

Ms. Young said that the Rites of May is an important tradition.

“You want to have events in school that people remember,” she said.