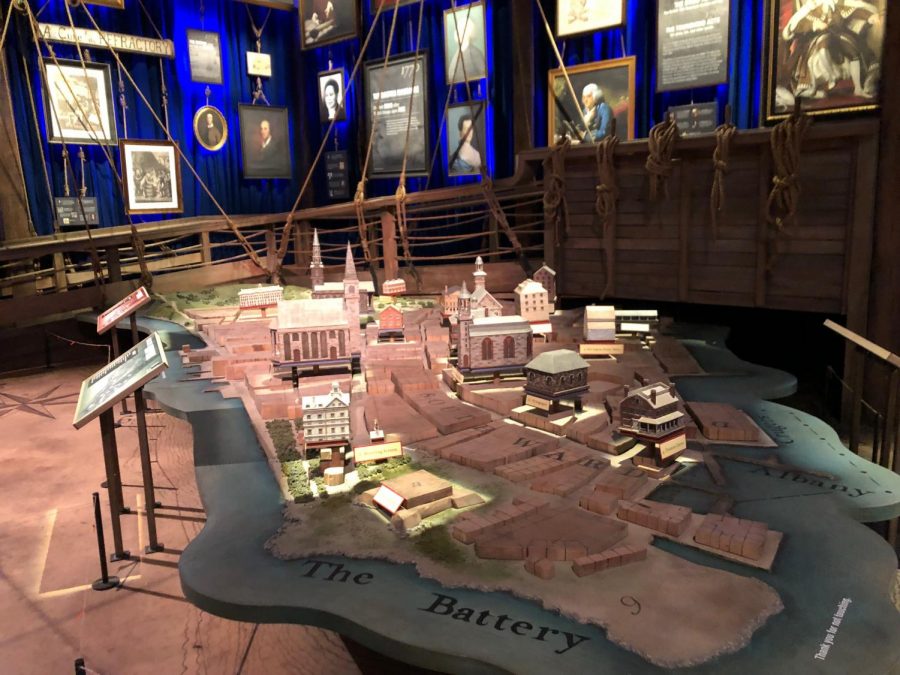 HAMILTON’S WORLD. This diagram of “The Battery,” a term for Manhattan based on the artillery batteries that protected the city from the British, comes complete with sets of buildings that defined New York at the time. The room is decorated with portraits of important figures in Hamilton’s life.

“Hamilton: The Exhibition” makes for an imposing yet confusing sight. It sits in what looks like a repurposed airplane hangar on Northerly Island next to Museum Campus, looking thoroughly out of place nestled in the overgrown fields.

The exhibit is an expansion on the hit Broadway show, “Hamilton: An American Musical,” diving deeper into the history but maintaining the same vibe and creativity that made the show so popular.

It’s not easy to get into — tickets are just under $40, you have to pick a specific time to go in and Northerly Island is somewhat off the beaten path. Despite this, however, it is well worth such trouble and expense, telling the story of the American Revolution in a new and engaging way, just like the musical did.

The exhibition, designed by David Korins, who also designed the set for the musical, centers around an audio tour that guides you through the various rooms depicting Hamilton’s life and the early history of America. You can also manually control parts of the tour to explore more fully the parts you want to explore.

The experience starts out in a way comparable to one of the exhibits at the Museum of Science and Industry, with a flashy introductory video and a standard set detailing Hamilton’s early life. However, the second room turns this experience on its head.

The second room covers the devastating hurricane that inspired Hamilton’s first piece of writing. The room is dimly lit and cylindrical, a staircase spiraling around the edge of the dominating piece, a slowly-rotating spectacle of the destruction the hurricane must have caused, frozen in time.

Upon entering, I actually said, “Wow” out loud — innovative and beautiful reimaginings of history are exactly what made the Hamilton musical so popular.

From then on, I was spellbound. Few exhibits have made me as interested in their subjects. The way it fuses music from the show with historical audio, the way the sets pop out, even the interactive exhibits all make it come together really well.

For example, there’s a room in the middle of the exhibit that plays out the Battle of Yorktown, a major turning point in the American Revolution, on a tactical map in a command tent. The sounds of the battle play around you while the video plays and real figures of the generals move around. It’s just really fun to watch, and informative too.

The way “Hamilton: The Exhibition” presents American history makes it engaging and fun to experience. You feel both as if you are part of the history and watching a Broadway show, sometimes both at the same time. The exhibit runs through the entire summer, and if you get the chance you should definitely visit it.