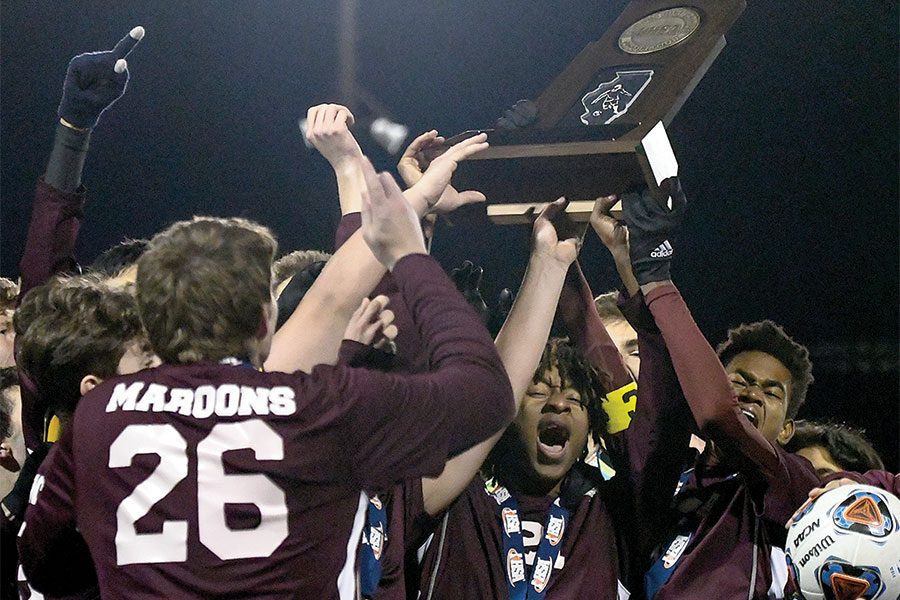 SNAGGING THE STATE TITLE. The boys soccer team celebrates after winning state final game against Marquette Catholic High School 2-1 on Nov. 2. After being down a goal in the first half, the Maroons answered with goals from Stanley Shapiro and Alex Bal. In the semifinal game Nov. 1, the Maroons beat North Shore Country Day School 3-0.

Early in the season, the U-High Boys Soccer Team lost 0-3 to Timothy Christian. That game secured a fact that most players already knew: the season was off to a bad start.

After that game, according to midfielder Sean Zhang, the players decided they needed to make some changes. Not to their lineup, but to their mentality.

“We were pretty scared about what was happening in the season,” Sean said. “We knew we had to pick things up.”

Pick it up they did. After a rocky start to the year, their momentum built as they won 14 out of their next 15 games, propelling them to a conference championship and, ultimately, to make school history as the first soccer team to win a state championship, beating Marquette Catholic 2-1 at the EastSide Centre in Peoria Nov. 2.

After finishing the conference season undefeated and riding a six-win streak, the team’s momentum carried into the postseason with considerably one-sided victories over Noble Street and Montini, where U-High scored an impressive combined 10 goals.

This led them to a rematch with Timothy Christian in the sectional finals, the same stage and stadium where they lost the previous two years.

“The past two years losing in sectional finals has just been emotionally awful on the team,” said leading goalscorer Jaden Lynch, a senior. “I think that’s kind of been the fuel for the past couple years and this year especially because we couldn’t lose three years in a row on that field.”

“It wasn’t until I placed the ball down that I realized the potential magnitude of what I was about to do,” Mickey said. “I thought to myself, ‘Wow, this would be incredible,’ so I decided to score.”

From then on, U-High’s style of play was decisive and one-sided. In the final three games of the season, the Maroons dominated possession and controlled the flow of each game with quick, precise passing and smart movement into space that set up multiple goal-scoring opportunities. The Maroons hammered Joliet Catholic Academy 6-0 on Oct. 29 and cruised past North Shore Country Day School 3-0 in the state semifinal Nov. 1.

“Overall we played good,” midfielder Miles Rochester said. “The first half was a little rough, but after an inspirational halftime speech, we came out and did what we have been doing all season and fixed it.”

Marquette scored the first goal scored the first half within the first 22 minutes. At 25 minutes into the second half senior Stanley Shapiro scored for the Maroons. Nine minutes later junior Alex Bal scored, putting U-High into the lead.

“Winning state was an amazing accomplishment for the team not just to get the trophy but to prove to a lot of people that we deserve respect from the rest of the state and that we are not just a small school that only focuses on academics,” said senior and midfielder Jayden Lynch.

The game was live-streamed by the Parents’ Association in Blaine S201 and was open to the Lab community.

The team beat North Shore Country Day School in the semifinal game Nov. 1. The 3-0 victory advanced the Maroons to the finals.

“I was so happy that I could give something back to all the seniors who have supported me my last 3 soccer years at Lab,” said junior and attacker Alex Bal.