Lab students bond through “The Nutcracker”

Dancers find community in working together for annual holiday ballet 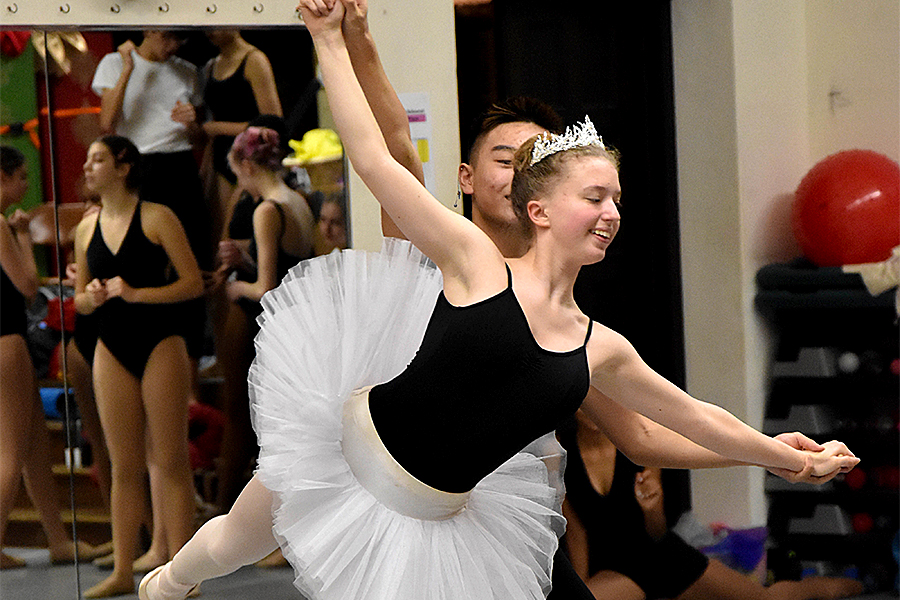 SNOW ROYALTY. Junior Naomi Corlette dances a duet with Marcus Tian, a senior at Jones College Prep. The two have been rehearsing since early October along with many other U-High and Chicagoland students. The performance premieres Dec. 13 at 10 a.m. Naomi, who began her dance career at age 3, has had the Snow Queen role in mind for many years, and strives to be a role model for younger dancers.

In one scene of “The Nutcracker,” a dancer moves across the stage gracefully as the Sugar Plum Fairy on the tips of her toes. In another, dancers march perfectly in sync as an army of toy soldiers while one sword-fights the Mouse King.

Despite different roles, each dancer supports every other whether on the floor or off it.

Every December, dancers from the Hyde Park School of Dance perform Tchaikovski’s famous ballet “The Nutcracker” at Mandel Hall on the campus of the University of Chicago. After placement auditions in September, dancers learn the choreography and continue to polish the ballet each week until the premiere. This year’s Nutcracker will premiere Dec. 13 and run through Dec. 15.

According to ninth grader Sarina Zhao, because of the many hours of time spent together, each dancer is motivated to improve and build strong relationships with one another.

“One of my favorite things about the ‘Nutcracker’ production and the Hyde Park School of Dance in general is the community. Everyone is super close, and you get to know the people you’re dancing with super well,” Sarina said. “You can reflect upon what you were in your first ‘Nutcracker’ and see how you have grown since then.”

The two-act performance consists of dancers ages 7-18, assigned to roles based on experience and skill. Over time and countless hours of practice, those dedicated to improving can progress more and more into the spotlight.

Junior Naomi Corlette will dance as the Snow Queen, widely considered to be a primary role of the ballet. She emphasized how she intends to inspire those looking up to her based on her previous experience.

“This has been my dream role for a long time,” Naomi said. “Since I’ve wanted to have this role for so long, I know there’s a lot of younger dancers who also want this role or similar roles, so I try to be a good role model.”

Naomi said dancers in the community are close-knit and how they look out for and show great sincerity and care to each and every person around them.

“Everybody is very supportive and they congratulate people when they do well,” Naomi said, “and everybody’s always there for you if you have a rough day.”

So while the Mouse King may be fighting a Toy Soldier on-stage, off-stage they have each other’s backs.