Break it down: senior finds passion for hip-hop

From working as a DJ to producing electronic music to his specialty, hip-hop dance, Julian Kennedy has become a musical jack-of-all-trades. 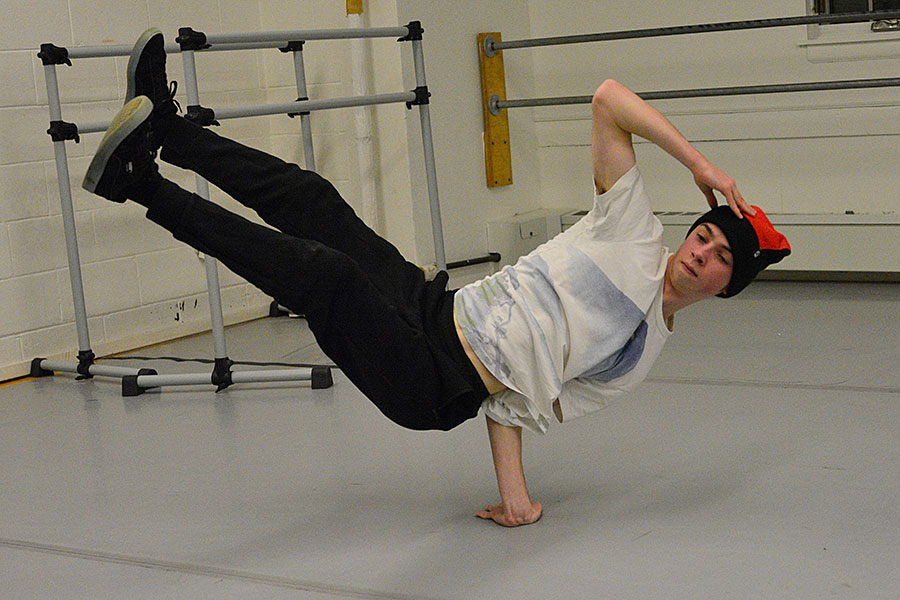 MAKING MOVES. Practicing his air chair move, Julian balances himself on one arm. Julian, who began dancing three years ago, practices multiple times a week at the Hyde Park School of Dance. Julian also produces hip-hop instrumentals, as well as working as a DJ in his free time. As a senior, if the opportunity were to present itself, Julian said he would like to keep dancing in college.

With the strong bass pulsing in his ears, senior Julian Kennedy moves across the dance floor practicing everything from improving his “flare” to perfecting his “windmill.” For the past three years, Julian has used breakdancing as a way to stay in shape and experience a new community.

As a middle schooler, Julian took a bunch of hip-hop dance classes across the city to find out what style he liked best.

“With time, I discovered that breakdancing was what I was best at and what was the most fun,” Julian said.

Once he figured out breakdancing was right for him, Julian started watching videos on YouTube and attending events around the city in order to become involved in the breakdancing community. After learning more, Julian found a breakdancing class at the Hyde Park School of Dance and immediately knew he wanted to sign up — but his journey didn’t stop there.

“There was a teacher I had who invited me to join his youth crew called Stick and Move Youth Crew,” Julian said.

Founded in 2015 by Jonathan St. Clair, the crew is an organization full of kids from all over Chicago, with the same passion: breakdancing.

“Julian is one of the advanced ‘b-boys’ in the crew and sets a strong example of dedication and leadership for his teammates,” Mr. St. Clair said about Julian’s role in the group, referring to Julian as a “b-boy,” a common term for “breakdancing boy.”

Although the crew is more active in the summer, they get together every Saturday to practice. When they aren’t practicing, the crew performs at events, competes in breakdancing battles.

But, it’s not just breakdancing that has taken over Julian’s life, throughout high school he has fallen in love with producing electronic music.

Julian started by playing around with different music software, but after taking the Digital Music Production course two years ago, Julian said he started to really understand the mechanics of producing music and ultimately began uploading music to platforms such as SoundCloud.

“Once I got more into producing music, I decided I wanted to get into DJing. I realized that if you’re a producer, being a DJ is also pretty beneficial,” Julian said. “I applied to a DJing program through After School Matters, which is a Chicago organization that helps students get involved in small things they are passionate about in the city.”

Julian was accepted to the program at the beginning of this past summer and got to DJ at events like basketball tournaments or school fundraisers.

Both breakdancing and DJing have propelled Julian into different communities that he says he would have never gotten the chance to be a part of if it weren’t for him pursuing his passions.

“It’s really rewarding to be able to do something that not a lot of other people can,” Julian said. “The people I’ve met through breakdancing make it even better. I love it.”