To protest, dancers must sit 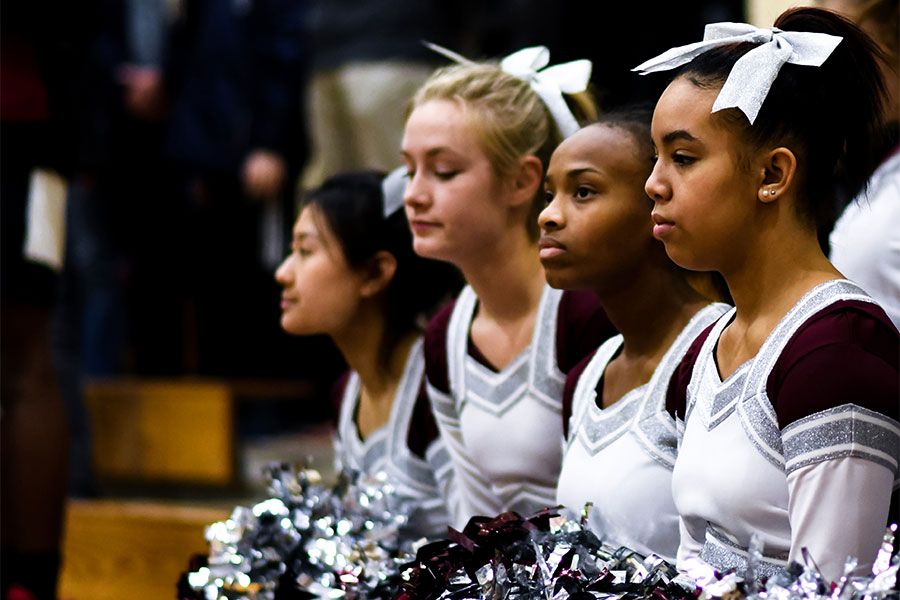 SITTING IN SOLIDARITY. Dance Troupe members sit on the bleachers while the National Anthem plays at game on Jan. 14. Told kneeling would be inappropriate, dancers sit following suite with athletes across the nation to protest the oppression of black people and people of color in America.

Title IX Coordinator Betsy Noel, Athletics Director David Ribbens and Dance Troupe coaches Nichole Magglioco and Tina Riviera held a meeting with Dance Troupe members Jan. 22 to apologize for requiring dancers to sit or stand instead of kneel during the national anthem and for the way that it was handled. Ms. Magglioco also apologized separately to the team.

According to Dance Troupe captain Macy Beal, Ms. Noel clarified that athletes, including dance team members, are not prohibited from kneeling during the national anthem.

Ms. Noel also told Dance Troupe members that the school would provide undergarments if they felt uncomfortable kneeling while wearing a skirt.

After being told they had to sit or stand rather than kneel during the National Anthem, Dance Troupe members were left feeling silenced by the idea that protecting modesty is more important than political activism.

According to Dance Troupe coach Nichole Magliocco, “Last year it started when we got new uniforms, we have skirts. They are straight and they are short. So, kneeling is not really an option because it is kinda inappropriate because they might show something.”

As a solution, Ms. Magliocco and Athletics Director David Ribbens decided it would be appropriate for the girls to sit rather than kneel, starting at the Dec. 10 boys basketball game.

However, sophomore Dance Troupe member Kira Sekhar pushed back on the proposal

“We definitely could’ve kneeled,” Kira said. “There are parts of our dances where we’re kneeling or squatting, and we’re wearing Spandex, so I don’t think it was really about modesty.”

“I think it’s fine for students not to participate in the pledge of allegiance and to find alternative ways to express their view,” Dr. Abelmann said. “I hope that students feel like they can come to the administration to talk about concerns that they might have related to any curtailment of free speech.”

During one of the Dance Troupe practices, Ms. Magliocco asked members to write down their reasoning for kneeling or standing and what they were doing to support the cause. Although Ms. Magliocco said the purpose of the exercise was to help her understand both decisions, Kira experienced the exercise differently.

“The way she phrased it was like if we weren’t doing something for the cause then we shouldn’t be kneeling or sitting,” Kira said. “It felt like much more of a way to single people out for their personal choice rather than to understand our choices and educate herself.”

Mr. Ribbens said the exercise was as much for the dancers as it was for Ms. Magliocco, and the boys basketball team participated in a similar activity the year prior.

“We are generally very liberal with these kinds of conversations, but the way this was handled just left us very emotional,” Macy said.

Ms. Magliocco said she conducted the activity this way, so each member could be heard.

“We had them write it mainly because we didn’t want a handful of people taking over the conversation,” Ms. Magliocco said, acknowledging the discomfort of many dancers with the activity. “We have strong personalities on the team, and then there are some that don’t really like to talk at all.”

Ms. Magliocco emphasized that the majority of the team was sitting rather than standing and she didn’t want anyone to feel pressured to sit. According to Ms. Magliocco, multiple students wrote about feeling pressure to sit rather in efforts to unite the team.

Ms. Magliocco stated her concern to the Dance Troupe.

She said, “I wanted the let the whole team to understand this isn’t to say you are wrong or right, but this is to let everybody understand there are different opinions on this team and you should never feel pressured one way or another. And everybody should be supportive of each other.”