From a symbol of wealth and status to a part of our culture that is present in every corner of life, smartphones have evolved over the last 12 years to become the new normal.

Once dominated by television and radio, smartphones now rule the free time among Generation Z

At any grouping of people, one thing is always present: cellphones. Whether they’re out to kill time in an uncomfortable family situation or to share information, the faint blue glow of the screen is hard to miss.

Mobile devices are quickly becoming the leisure device of choice. According to NPR, 84% of teenagers own their own smartphones.

For most, social media is the main purpose. One platform that became 2019’s trendiest app is TikTok, which consumed 68 billion hours of users’ time last year.

Senior Eli Hinerfeld said he spends about four and a half hours of his day on his phone, mostly spending time on social media apps, including a lot of time on TikTok.

“The appeal of TikTok for me is the endless entertainment that it provides,” Eli said. “I can consume hours of content without even knowing which definitely has its pros and it’s cons — definitely more of the latter.”

Before he used his phone quite as much, Eli filled the time through pursuing other hobbies.

“I definitely spent more time either playing video games or making music,” Eli said. “My screen time increased by almost an hour and a half per day after I got TikTok.”

Staying in touch with friends via messaging, games or social media are other popular uses. Sophomore Natalie Hultquist said she uses her phone four to five hours each day, mainly to communicate with her friends via Snapchat.

“With Snapchat I like that I can connect with many of my friends. It has this constant energy to it, where there is pretty much always someone on Snapchat, which can be a little exhausting if they’re only sending you plain face pics,” she said.

“As for Spotify, I love that I can organize my music, play the music I want to hear almost anytime, and I can share the music I listen to with my friends,” she said.

Phones help keep teens organized, too. Senior Charles Chen uses his phone for about 90 minutes daily, mostly to keep track of his activities.

“Most of the time it’s the Gmail app, WhatsApp for swim team stuff, Schoology or Reddit,” he said.

According to Statista, 42% of internet users between the age of 14 and 24 use Reddit, making it the sixth most popular website in the US ahead of sites like Netflix and EBay.

Similar to Eli, Natalie and Charles, sophomore Alina Susani uses her phone to keep in touch — both with her friends and the world around her.

Alina Susani said, “My phone helps with communication across the world, and I don’t think I could hold the relationships with my long distance friends the way I do without social media.”

When he joined the video-sharing app TikTok in October, Zach Leslie wasn’t looking for clout. In TikTok, he said he saw a platform for his creative and somewhat random sense of humor.

Over Thanksgiving break, senior Zach Leslie filmed himself drinking five glasses of chocolate milk while CeeLo Green’s “F*** You” played in the background. Soon after, he uploaded it to the video-sharing app TikTok, and it blew up, amassing 3 million views and gaining 3,500 new followers. 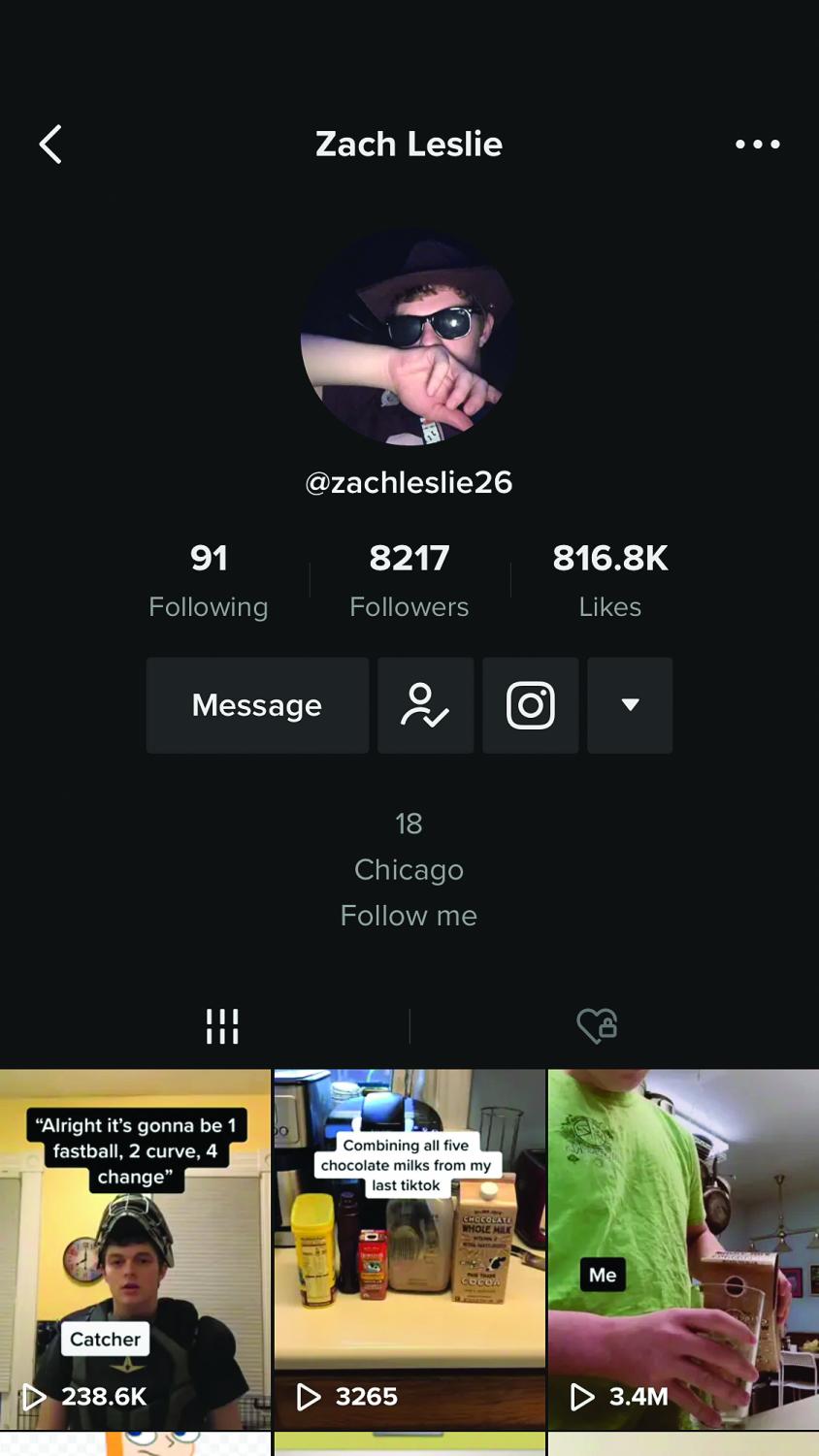 Zach’s brush with fame from the viral video was an added bonus.

“It only really takes one, and all of a sudden you have thousands of followers, whereas in the past you may have had 100 or something,” Zach, a senior, said.

For some, however, social media can cultivate a reliance on public recognition — a fact that users and platforms alike are beginning to address.

Instagram user Emily Zhang said the obsession with social media was about something much deeper than vanity. Instead, she wanted to refine her entire lifestyle. Instagram, she said, encourages users to show only their best selves.

“I would want people to see my page and think: ‘Oh, she’s living a nice life.’ I liked posting pictures where I was with my friends or where I’m doing a hobby of mine,” Emily said. “I think those would fit into my idea of ‘these are my best moments.’”

Not everyone has a perfect life to show. 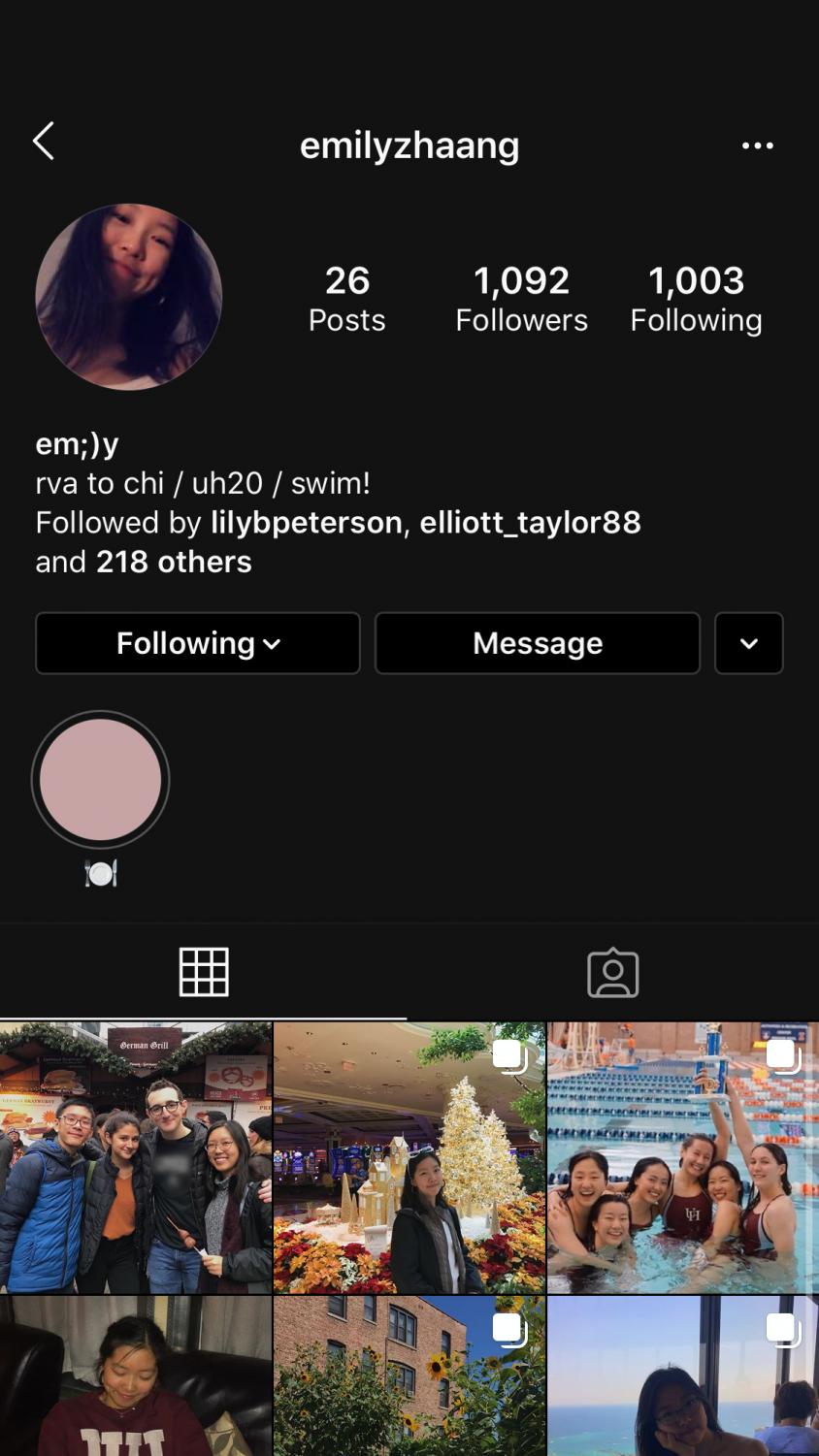 screenshots by Nikhil Patel
FULL FOLLOWING. Senior Emily Zhang’s Instagram page and senior Zach Leslie’s TikTok profile are two examples of the differences between the social media types. Zach and Emily struggle with walking the line between maintaining trends and staying true to themselves.

Emily said, “There are definitely instances where people feel like they can’t come forward with things that they’re struggling with, in certain areas that might not be picture-perfect.”

This fall, Instagram began hiding like counts from users in an effort to stamp out the platform’s culture of comparison. For Emily, the change was a good one, as she would often feel discouraged when her posts didn’t get the level of engagement she’d hoped for.

Since the beginning of this school year, Emily, a senior, has cut down significantly on her use of the platform, citing college applications and increased academic pressure as major, time-consuming factors. Before then, she said, Instagram had her trapped in a validation loop — wherein the more likes she got on one post, the more she needed to feel happy with the next.

“There’s always that feeling of wanting more, you know. After I reached my first post that made 100 likes, it was great for a little bit,” Emily said. “But then it was like, ‘OK, now I have to increase my following and followers, then get to the next [milestone].’”

On TikTok, Zach said there are more opportunities to be both authentic and popular.

On the app’s “for-you page,” a somewhat randomized feed of video clips, fame is not a prerequisite for inclusion, and TikToks from lesser-known users are often promoted to the same degree as those from famous users.

From budding comedians to teenage fashion icons, TikTok, he said, has democratized clout.

“One of the things that makes it cool is it’s fairly easy to, like, see content from people you haven’t necessarily seen it from before,” Zach said. “On YouTube, it’s harder to find lesser known people who make videos, whereas on TikTok you can just get on the for-you page even if you have 10 followers or whatever.”

According to Emily, Instagram has the potential to cultivate a more authentic experience, one wherein humor and refinement are equally venerated. Wistfully, she remembers how, back in middle school, people used to post spontaneous photos and silly challenges without worrying about how much engagement they’d get. Removing likes, she said, might bring some of that back.

“When I saw that this update had happened, I thought it was a step in the right direction,” Emily said. “It was a point where enough people had realized this was an issue, that this could be very damaging.”

More than four of five teens in the United States own a smartphone, according to a 2019 report released by Common Sense Media. Smartphones provide access to essentially unlimited amounts of information, but they can also distract students from school work. Senior Vivi Corré said she sees students using their phones in class but does not respond. 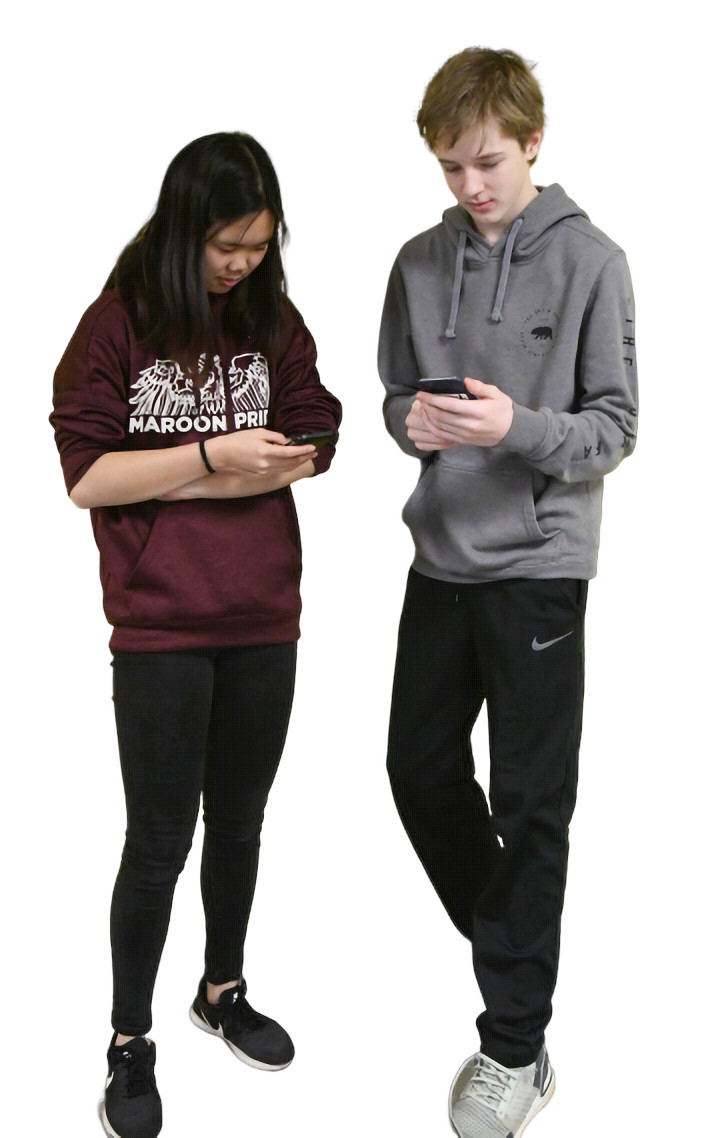 “I often feel like at this point it’s just become so widespread that it’s hard to say it to everyone,” Vivi said.

In monitoring phone usage in class, teachers vary in their policies. Spanish teacher Suzanne Baum requires students in her classes to leave their phones on a rack at the beginning of the class, while other teachers including science teacher Sharon Housinger prohibit them from being out and let students regulate themselves.

Brian Hewlett, Lab’s director of innovation and technology, said, “It’s up to the instructor to know the students in the class and what they think will best allow them to learn.”

Outside of schoolwork, there are a variety of facts and fictions associated with these devices.

MYTH: Using phones in class can be detrimental to learning.

TRUE: A study published in Educational Psychology found that students in classrooms that permitted non-academic use of devices such as smartphones performed worse on exams and retained less information over time than students in classrooms not permitting such device use. The policy had a classroom-wide effect and even impacted students who did not actually use a device.

Ms. Housinger said smartphones can be psychologically rewarding and activate pleasure pathways in the brain that distract students and reduce their ability to concentrate.

MYTH: Phones are only a distraction when students actively use them.

FALSE: The distracting potential of smartphones is not limited to when users are actively engaged with them.

Science teacher Daniel Calleri said part of the brain is engaged with the smartphone whenever it is out.

Indeed, the presence of a smartphone can cause “brain drain,” reduced cognitive capacity, according to a study published in the Journal of Association for Consumer Research.

TRUE: According to the National Sleep Foundation, blue light can affect sleep by delaying melatonin release, increasing alertness, and altering the body’s biological clock. The result is less sleep or lower quality sleep with less REM. One solution is to shift to red and yellow lights that do not damage sleep.

TRUE: Despite their ability to distract users, smartphones can contribute to learning when facilitating activities such as Kahoot! or Quizlet Live.

However, Spanish teacher Suzanne Baum, who sometimes uses these programs in her classes, said they have little pedagogical value.

“It helps me tune out all other distractions around me. When it’s silent, I feel like I get a lot more easily distracted,” sophomore Tyler Nava said.