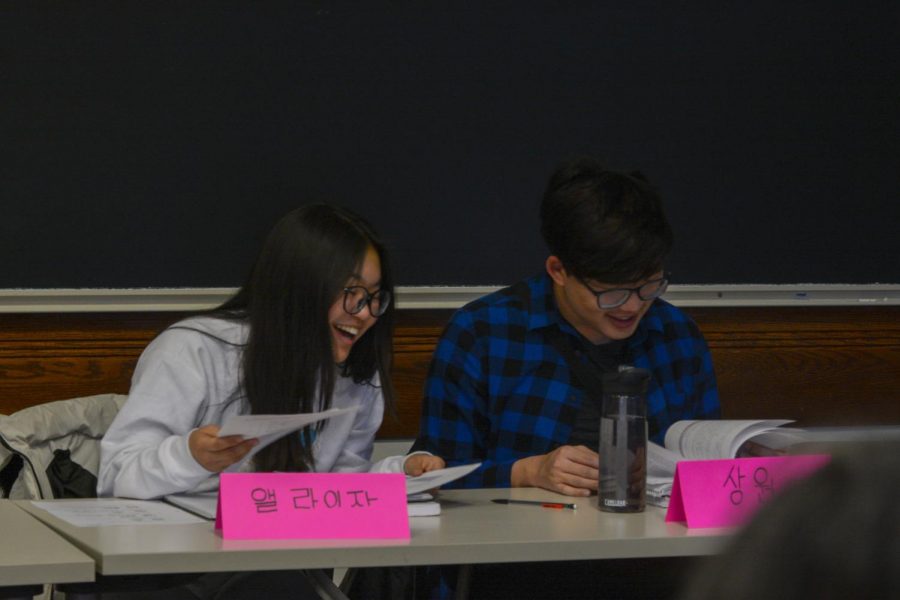 LEARNING BY SPEAKING. Eliza Doss works with 2019 U-High graduate Ryan Lee in a Korean class at the University of Chicago. Students attend the class five days a week to learn their heritage language.

As Eliza Doss steps into her University of Chicago language course, she is welcomed into the classroom with a traditional Korean greeting and a bow. Taking her seat among university students, Eliza, a U-High junior, gets ready to learn her heritage language, Korean. For Eliza, who was adopted in Korea and brought to the United States, learning the Korean language is a way to connect with her heritage.

“I’m Korean, and I’ve always wanted to learn Korean and I thought it was really cool that there was even a chance for me to take it,” Eliza explained.

To take a class at the university, high school students must first complete the language requirement at U-High. In middle school and high school, Eliza took Spanish. As the years passed she felt she had come to a standstill in her Spanish career and was interested in the opportunities presented by the university.

“I was interested in the language and culture mainly because of my religious background but also because I’d like to study abroad or live in the Middle East in the coming years,” said Sanaa, who is taking the elementary/beginning Arabic at the University of Chicago.

She studied French at U-High and was very interested in the opportunities presented by the university, but she was more interested in learning Arabic than continuing in French. Sanaa also had some rudimentary experience with the Arabic before, but she wanted to understand the mechanics of the language because she is thinking of using it in the future.

Much like Eliza, Sanaa knew she wanted to take a class on her heritage language for a long time, and started building the class into her schedule sophomore year.

Although university language courses provide opportunities, Eliza pointed out they are a serious time commitment.

“It’s every day, five days a week for 50 minutes. The class is hard,” Eliza said. “It’s a lot more than when you come from Spanish at Lab to taking Korean at the University, but I was ready for the workload.”

Though the classes meet every day, Sanaa said that since the classes are so small, she gets even more practice with the language and establishes a closer relationship with her professor.

Sophomore Alina Susani is one of the students who speak foreign languages at home fluently but also inclined to better their understanding of their heritage language. She has grown up speaking Italian and Turkish at home but hasn’t yet taken a high school or university class in those languages.

“I feel it would be pretty helpful and cool because I’m fluent in speaking, but I struggle sometimes with grammar and spelling,” Alina said.

Her only concern was that if she took the class on a language she mostly already knew, she would find the class boring because the classes are tailored for those who have no connection to the culture.

Language is a way to connect with people all over the world, and with the help of the University of Chicago, students at U-High are able to seize the opportunity to learn a new language whether they have the cultural background or not.