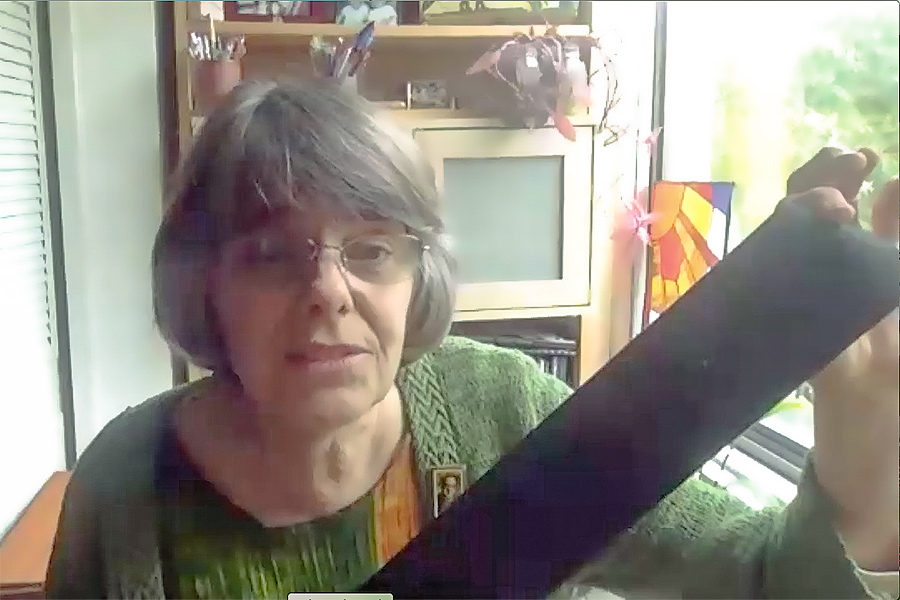 Holding up a black armband similar to the one that made her famous, Mary Beth Tinker tells of her experience in activism in the 1960s during a Zoom webinar April 23. Ms. Tinker's armband, a symbol of protest against the Vietnam War, sparked a legal battle with her school that reached the supreme court, which ruled in her favor, establishing the first amendment rights of students in public schools.

Students heard from speakers and engaged in conversations as part of virtual social justice workshops April 20-24 under the theme RESIST, an acronym for Reclaim, Equity, Sustainability, Intersectionality, Solidarity and Take action.

According to Social Justice Week co-leader Franzi Wilde an average of 20 students tuned in to each social justice workshop with more popular ones drawing 30-35. A webinar on April 23 featuring civil rights icon Mary Beth Tinker drew more than 100 students, parents, faculty and staff.

Social Justice Week usually has two required workshops during an extended assembly period. However, due to remote learning, attendance at SJW events was optional.

However, Franzi believes that doing the workshops online has made them more appealing to students.

“In many ways, it has made the week more accessible to people because they can sort of jump into workshops” Franzi said.

Despite these positives, Franzi also cited some obvious disadvantages to online workshops.

“Discussion is a little bit more difficult,” she said, “because some of the obvious social cues around body language, like not having people speak over each other, and that kind of thing is sort of hard to figure out via Zoom or online.”

In a talk during the assembly period April 23, Ms. Tinker discussed her experience as a nurse and also someone who worked with social justice issues.

“I just got so tired of taking care of kids who are paying the price for the policies of adults that had no input from the children and from the teenagers themselves, yet these policies are going to define the lives of so many kids,” Ms. Tinker said. “So that’s why I have been traveling the country, speaking with young people, teachers and community members about young people and the rights of young people.”

Junior Naomi Corlett led the “Implicit Bias in STEM”  workshop for Wi-STEM on April 21, and said while initially there were some difficulties, overall her workshop was a success.

“I didn’t feel that the virtual-ness wasn’t that big of a problem,” Naomi said. “There were definitely some awkward moments but once we started discussing it felt like it flowed.”

To adapt to the online platform, Naomi had to adjust her workshop’s activities.

“When we do the workshop in person we do this activity where, like, you take a step forward if different things apply to you or take a step back. So like an example if English is your first language take a step forward,” Naomi said. To adjust to the virtual platform, Naomi had people keep track of which statements applied to them or raise a finger rather than stepping forward.

According to Franzi, going virtual had benefits to Social Justice Week, forcing them to utilize online resources. SJW organizers created a website where they posted the descriptions of the workshops as well as resources on how to get involved in social justice issues.

Additionally, Franzi said the chat function in Zoom calls allows people to participate even if they are uncomfortable speaking out loud in front of people.

“I think many ways a lot of the things that make Social Justice Week really special and really impactful for a lot of people are the same,” Franzi said. “They’re still student-hosted workshops. They’re just happening at lunch and after school and over zoom, of course, rather than in person. We’re still doing an art project. But rather than the physical art project, we’re doing a video project, which is kind of cool.”