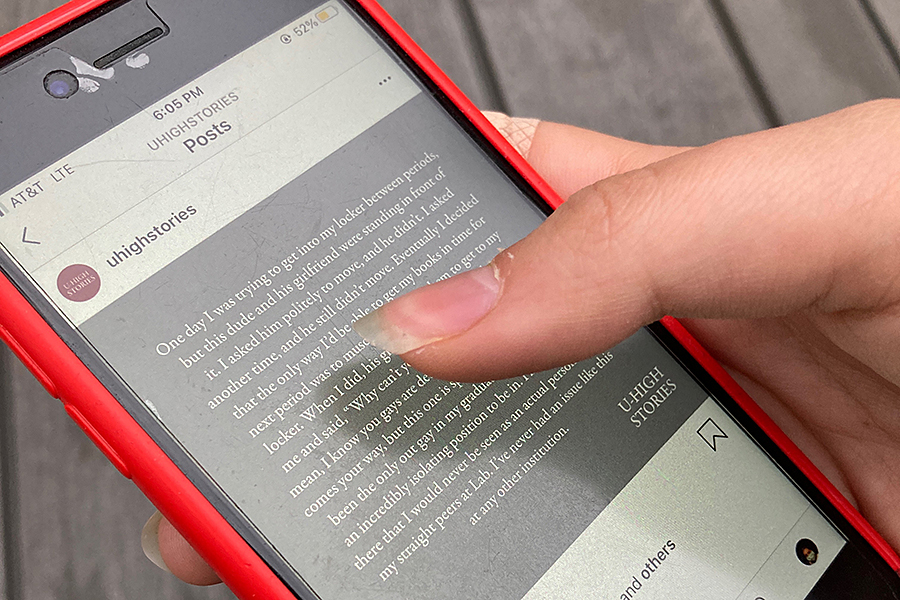 Juniors Will Trone and An Ngo managed U-High Stories and said they were motivated to start the Instagram account to expose the truth about discrimination and hate at Lab.

Following a 2019-20 school year that had several public instances of bias and which ended with national uprisings over racial inequity, this summer students created platforms where members of the Lab community could submit stories of hate and discrimination at Lab to share with the broader community. The stories submitted to an Instagram account called  U-High Stories and to Destiney Williamson’s personal Instagram account gained the community’s attention and were largely unsurprising to Lab students and faculty, but are already having an impact.

Juniors Will Trone and An Ngo managed U-High Stories and said they were motivated to start the account to expose the truth about discrimination and hate at Lab. An is a member of the Midway staff but was not involved in the reporting or editing of this story except as a source.

“I think for both of us, there’s always been this idea that the Lab is too good, too liberal too progressive to have students dealing with these issues. And obviously, just looking at the stories, that’s just not true,” Will said. “I mean, yes, Lab is more progressive than some schools in some ways. Yet, that doesn’t change the fact that people are still struggling because of identifiers that they can’t change. So I think for me, that I kind of wanted to push against that narrative.”

According to An, she and Will were initially inspired by Latin Survivors, a similar account run by students at the Latin School of Chicago to share stories from current and former students about anti-Blackness, racism, xenophobia and other forms of bias.

Throughout the summer, similar accounts were created by students at Chicago high schools such as the St. Ignatius College Prep account, True Colors of Ignatius, and other schools around the nation.

Destiney’s account published stories similar to U-High Stories from July 9 until July 16 and received over 80 submissions. However, unlike U-High Stories, Destiney published screenshots and photos alongside the stories on her account.

On July 17, Destiney sent a slideshow of all of the stories called “Lab’s real facts at a glance” to the entire administration and faculty. The 178 slides were divided into 11 categories: classism, religion, implicit racism, explicit racism, administration and teachers, self harm, health (mental and physical), homophobia, general, sexual assault or harrassment, and praise for teachers of color.

Priyanka Rupani, Laboratory Schools director of diversity, equity and inclusion, said the U-High Stories account was not surprising to administrators such as herself. Because many similar accounts had grown quickly, primarily at the college level, Ms. Rupani expected to see a U-High account in some form.

“I’m not naïve to assuming that our school is immune to all the issues that I and others are working to remedy,” Ms. Rupani said, “and even though I knew that this is something that was happening across the country, it still hit differently when you see the experiences that our students are having.”

Just two days after the account started, Will and An took a break from posting due to concerns about legal liabilities. They took advantage of family friends who were lawyers to give them advice on how best to proceed.

“We were just trying to figure out how to make this platform as safe as possible for everyone involved, for us, but also people who are submitting stories,” An said.

According to Will, they paused the account not only to make the account less liable for them, but also for those who submitted stories.

“A lot of it was making sure that people, when they submit a story, understand what could possibly happen, that it is a public site and that it could be shared. Just basically telling them the risk,” Will said.

To make the account more safe, they became much more careful about what identifying information they included and omitted the grade, school and title of the person who submitted or mentioned in the post, according to An.

Additionally, people submitting stories now had to affirm that their story was true to the best of their knowledge and that it was valid to their own personal experience according to An.

“I wanted to have a freer place for student stories,” Destiney said.

According to Ms. Rupani, as a direct result of the U-High Stories account and other accounts like it, the administration has prioritized collecting more data from the student body through a bias reporting form. The form, scheduled to be released in the next month, will allow administrators to respond to specific incidents, as well as to target proactive DEI education. The form will protect the privacy of all parties involved in any given incident.

Most teachers and high school departments have also added DEI statements to their class syllabi to foster a sense of community and inclusivity in the classroom.

“I think everything, both directly or indirectly, responds to U-High Stories,” Ms. Rupani said. “U-High Stories has kind of elevated what folks might have already known is happening, and it’s another way to help us prioritize what we should be doing right now.”

With more than 100 stories posted on the Instagram account, Ms. Rupani said that while discipline for unacceptable behavior is important, efforts are better spent preventing future infractions.

“The major focus of this work is to focus on the preventative, and on the ‘how do we ensure that we don’t have continued incidents like this,’ by educating folks, by creating structures that support folks of marginalized backgrounds,” Ms. Rupani said.

According to An, U-High Stories was intended to spread awareness of the issues at U-High to people outside the immediate high school community. An said some of the most visceral reactions came specifically from parents of young students in the Lab community.

“For me, it’s a lot about opening the eyes of people who don’t necessarily have to confront these experiences in their daily lives,” An said. “So I think it was really good to have parents, who hold so much power in their community, seeing and reacting and feeling these experiences that are really painful for some of these students.”

But for An and Will, the end goal was far simpler than the community-wide change U-High Stories has caused.

“We never set out to get justice for these people,” An said, “because we cannot do that. But rather, amplify these stories and bring awareness to this issue.”