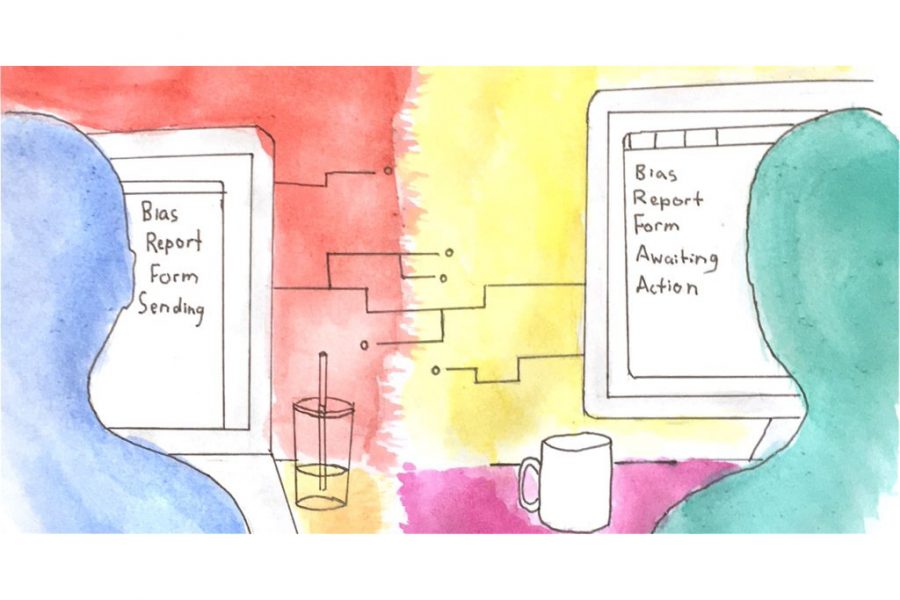 Although the bias reporting system is a great step, without a clear course of action for what happens after it is received, there cannot be substantial change.

As the Midway sees it…

“I had a teacher who held a bias towards more “attractive girls” and would give extra credit “because you looked pretty.” He commented on my appearance multiple times.”

“A teacher asked me if I celebrated Christmas “like the Jewish people do on TV by eating Chinese food.” I was trying to do my work when they asked me this.”

These are only a few examples of the many stories alleging faculty discrimination against students that were posted on social media accounts like U-High Stories over the summer. One of the schools’ responses was to institute an online bias reporting form, meant to help students report bias and discrimination from either other students or teachers. This form is a vital first step to curb discriminatory behavior among our school’s faculty, but there must be administrative follow-through to ensure transparency and accountability.

While Lab has focused on improving reporting guidelines and clarifying disciplinary actions following discriminatory behavior by students, one area for improvement is the administrative mechanism for the discipline or removal of faculty who are known to repeatedly microaggress or practice bias. By the nature of their profession, teachers are role models for students. So, even more than students, they must be held to a high standard of accountability for their actions.

Unfortunately, just reporting the bias is not enough. There must be a substantive, consistent and clear set of actions following every report of discrimination to rectify the injustice. Without a clear response to each report, students are disincentivized to report instances of bias. Guidelines for such responses are not readily available for students. This disincentivizes students from coming forward in instances of bias if they do not know how their report will be handled. An outline of the disciplinary process must be fully transparent for students and faculty to foster a much-needed trust with the administration.

In some ways, a bias report against a teacher is very similar to one against a student. Both demonstrate an instance of bias in the school environment and demonstrate a need for change and action. But, when a student is reporting about a teacher, there is an added power dynamic of the allegation’s effect on the teacher’s record and the teacher’s control over the student’s grade. Despite these added barriers, it is still vitally important for community members to utilize the bias reporting form when necessary.

Of course, increased accountability does not mean that Lab should terminate every offending teacher — the Midway has previously argued against casting aside people who engage in racist behavior — but it does mean that each allegation should be taken seriously, and the faculty member at hand should be taught about the harm their behavior has on others. Starting in primary school, Lab helps students fix the errors of their behavior by informing them of their faults and asking them to do better. As students’ role models, Lab teachers must be held to the same standard to learn and improve following instances of discrimination or bias.

With tens of stories alleging bias in the classroom shared via social media, the administration is now publicly aware of this problem and cannot get away with merely leaving the door open for complaints in hopes people submit. It is their responsibility to fulfill their pledge to honor Lab’s diversity and actively seek out equality in the classroom. This proactive approach must continue until all students feel safe with their identities when they attend Lab.

While the administration must play a large role, the effort to correct bias among Lab’s faculty must include contributions from the entire community. Students and parents must report faculty, and, to ensure fair discipline, the Faculty Association must work with the administration to address patterns of troublesome behavior. Without imposing transparent guidelines for dealing with problematic faculty and taking each complaint with the seriousness that it deserves, well-intentioned efforts like the bias reporting system fall flat and have no hope in changing the exclusion and discrimination that many students experience.