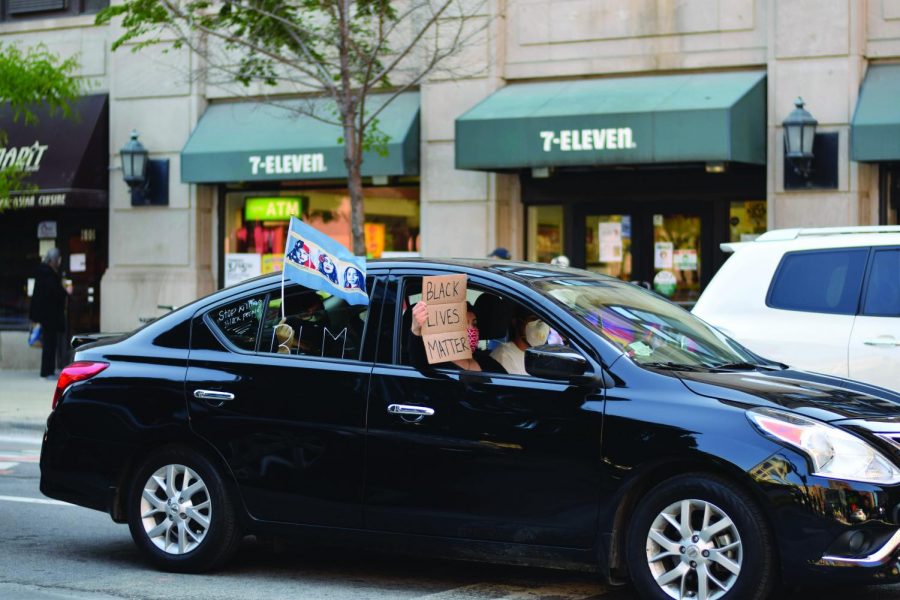 After months of attending BLM protests and calling out injustice on social media, 43% of students named equality/discrimination as the most important prominent campaign issue to them.

Amanda Cassel and An Ngo

Equality/discrimination is the top issue for U-High students, according to the Midway’s mock election.

Joe Biden’s climate plan aims to have the country at net-zero carbon emissions by 2050 and the power sector rid of carbon pollution by 2035. The plan would put $2 trillion toward research and development with 40% of the budget being pledged to lower-income communities and communities of color that are disproportionately affected by climate change and pollution. Mr. Biden plans to create a division in the Justice Department tasked with regulating corporations and penalizing them for environmental effects.

During Donald Trump’s term, he has dropped out of the Paris Agreement, rolled back dozens of Obama-era climate policies and sought to spur U.S. oil, gas and coal industries. He has put forward $38 billion for clean water infrastructure. Mr. Trump has denied the impact of climate change and the human effect on the planet’s temperature, particularly the influence of climate change on recent California wildfires.

“I don’t think it should be specific individuals having to meet specific standards, like, I think there should be law that tells everyone how much pollution can be caused by them over a certain period of time.”

As a part of his “Build Back Better” plan, Mr. Biden laid out a comprehensive plan for racial equity. It includes supporting Black, brown and Native-owned businesses, increasing homeownership and access to affordable housing in communities of color and increasing access to higher education and reducing student loan debt for students of color.

In an unexpected shift during the Sinclair town hallOct. 21, Mr. Trump said systemic racism exists in policing. In the past, Mr. Trump has often questioned whether systemic racism exists at all. He has not put forward a plan to address racial inequities and has himself faced criticisms of perpetuating racist rhetoric. He often cites the low unemployment rates of Black Americans prior to the coronavirus pandemic as evidence that his policies positively impact Black Americans.

“I think that in this nation which is already extremely polarized, equality and discrimination is an issue that goes unnoticed, and it has been going unnoticed for far too long,” senior Sana Shahul said, later adding, “so for me, as someone who is Muslim, I often feel at times where I’m just [cast] as a small brown girl that my opinions aren’t heard and respected as my white counterparts.”

Mr. Biden, a devout Catholic, has changed his stance on abortion and reproductive rights throughout his political career. Currently, his plans for the Affordable Care Act include coverage of contraceptives and preventative care. As a senator in 1981, Mr. Biden supported an amendment allowing for states to overturn Roe v. Wade. Mr. Biden’s current plan states that it will prevent state laws from preventing access to abortion through parental notification requirements, mandatory waiting periods and ultrasound requirements.

Under Mr. Trump’s agenda, the Affordable Care Act will not cover abortions or require employer-provided medical insurance to cover contraceptives. Mr. Trump cites religious reasons for the majority of his changes to reproductive rights policies. Additionally, Mr. Trump’s Supreme Court nominee, Amy Coney Barrett, is expected to be confirmed next week, providing the court a conservative majority that could overturn Roe v. Wade.

“Since it will probably directly affect me if abortion rights are taken away, it’s really important to me,” sophomore Fermi Boonstra said. “It was disappointing to see that those are the people who are going to represent America, literally the epitome of privilege. A lot of people say that men can’t say anything about abortion, which I kind of agree with. So to see them debate over like a hypothetical woman’s body is just annoying… and kind of disheartening.”

Mr. Biden aims to expand and strengthen the Affordable Care Act by adding a public option that would be available to all Americans, regardless of their access to insurance. The public option would be more inclusive because it would be available to people in states that don’t have access to Medicaid benefits but would qualify otherwise with no premiums. It would also get rid of the income cap for tax credits meant to help pay for premiums and ensure that no household pays more than 8.5% of its earnings.

Mr.Trump plans to continue his efforts in dismantling the Affordable Care Act and replacing it with another health care plan, which he has yet to propose. His health care plan includes lowering prescription drug prices and the price of insurance premiums, as well as ending surprise billings. The plan will cover all pre-existing conditions. On Sept. 24, Mr. Trump issued an executive order on “An America First Healthcare Plan” that emphasizes giving patients choice and control over their health care plan.

“Right now the whole [coronavirus] situation stems from health care. So I think that is definitely one of the most important, if not the most important issues of this election. I feel like Biden has laid out some good points about how to deal with it. Whereas Trump for a long time denied its existence, did not promote wearing masks and did a lot of things that were really counter intuitive… He’s held rallies where he tells people not to wear masks.”