To fulfill commitment to student athletes, colleges should reallocate funds and not cut teams 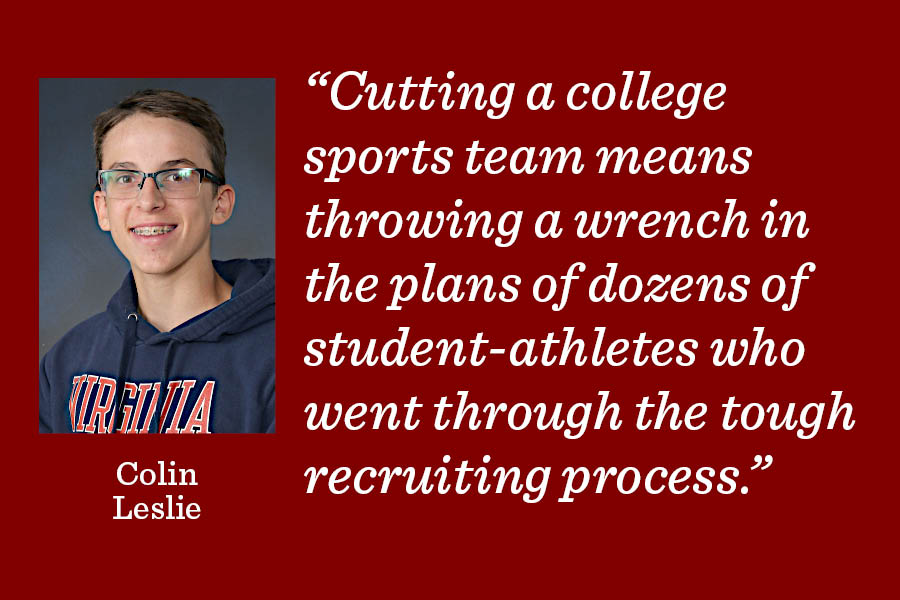 By cutting sports teams, colleges betray the commitments they made to their student-athletes and force them to choose between staying at their current school and continuing their athletic career writes reporter Colin Leslie.

Athletes spend years training to be recruited for college athletics, so when they step foot on campus, they want to play. Even though the global pandemic suspended many college athletics seasons this year, college athletes didn’t expect the pandemic to eliminate their sport from their college entirely. However, as of Sept. 30, the number of college sports teams cut because of the pandemic and the resulting budget concerns has surpassed 230, according to The Washington Post.

By cutting sports teams, colleges betray the commitments they made to their student-athletes and force them to choose between staying at their current school and continuing their athletic career. Instead of cutting sports teams, schools should spread enough of the money they make from higher-revenue sports to other sports that would otherwise be cut due to budgetary concerns, at the very least until their athletes are able to find a good alternative.

For many student-athletes, the educational and athletic benefits are equally important. For athletes who plan on playing their sport professionally, it may be a no-brainer to immediately try to transfer to a different school — despite not being their first choice out of high school. This adds the burden of having to unexpectedly go through the recruiting process for a second time. But athletes who will not play past college, as about 98% do, are faced with a much more complicated decision: give up the sport or give up the school?

Student-athletes work hard to have the opportunity to play their sport and receive an education, and those whose careers will end after college must decide whether continuing their sport for a couple more years is worth leaving their current school. Cutting a college sports team means throwing a wrench in the plans of dozens of student-athletes who went through the tough recruiting process, and, in many cases, forces athletes to give up the sport that they worked so hard to play in college. According to Business Insider, most schools are honoring athletic scholarships for their student-athletes, but college athletes still have to prematurely decide whether they want to continue playing their sport.

If schools want to say they value all of their athletes, they should reallocate funds from other teams to ensure that all their athletes can continue their careers.