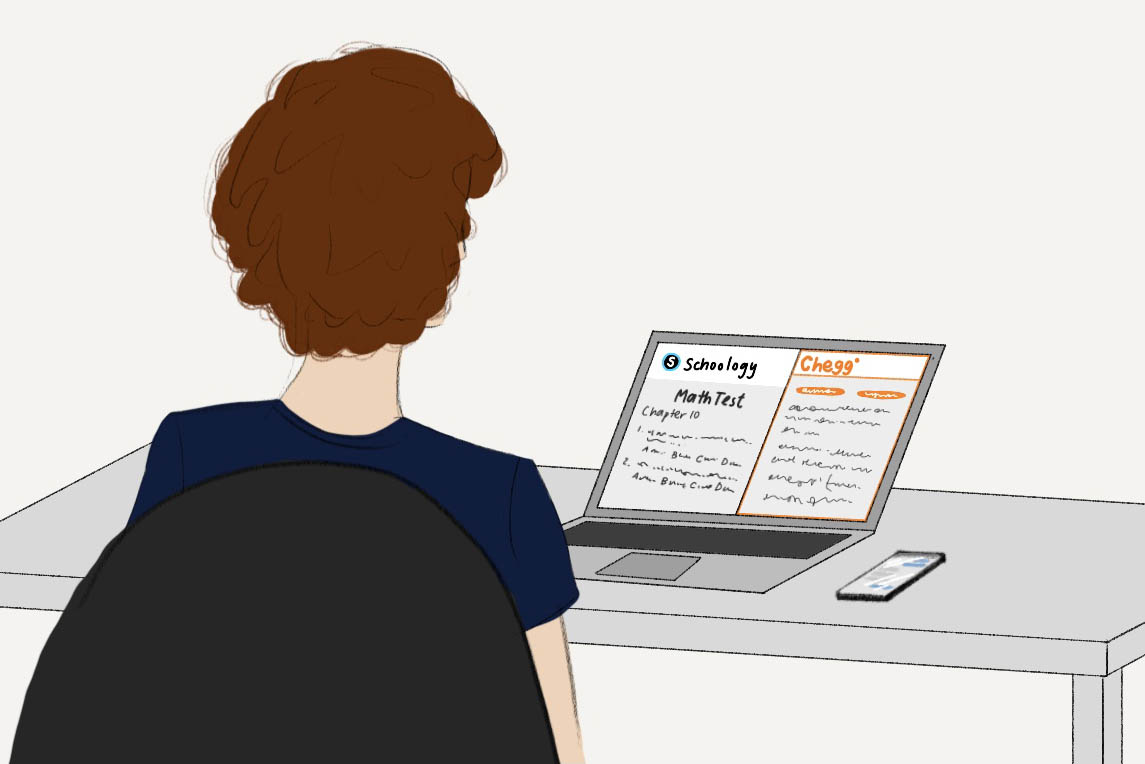 Until March of 2020, assessments were taken with pen and paper and under a time limit and with the watchful eye of a teacher. But, with the transition to distance learning, everything changed. The Midway spoke with students, faculty and an administrator about how testing and cheating look different in the distance and hybrid learning environments.

Before March 2020 most testing situations looked the same. A teacher would pass out a test, sit down at their desk and keep a watchful eye on any conversations or phone usage during any 45-minute assessment.

But during the last year, distance learning has made it easy for students to cheat:  to take a test on their computer while another browser tab is open, or to text their friend asking for help on a question.

Academic dishonesty has become easier during distance learning, and while the transition to some in-person classes could be used to supervise some students more closely during tests, some U-High teachers and an administrator do not view that as hybrid learning’s main purpose.

History teacher Christopher Janus said he prefers to test all students at the same time, and will continue to do so. He said the increased possibility of cheating during distance learning has not affected his plans for hybrid learning.

“I’m assuming that people are not cheating, but if they are cheating that’s their business and eventually they’ll get caught for it and be punished,” Mr. Janus said. “It’s not something I shape my teaching philosophy around.”

Science teacher Elizabeth Hubin has used Schoology to test during synchronous class sessions this year. During hybrid learning, Dr. Hubin plans to continue this assessment form, with tests only on days that all students are remote.

What sets scientists apart is their ability to digest scientific information and apply it and really have scientific literacy. None of that is memorization; it’s about really digging deeper into material.”

“I think that there’s better ways of spending [in-person classes] than just sitting and taking a test, so while I’ll still continue to have tests, I’m going to have them during our Zoom classes,” Dr. Hubin said.

Dr. Hubin said her tests focus on applying material rather than memorizing it, which makes it less useful to use the internet to seek answers. Additionally, to try to alleviate the temptation to use outside resources, all of her tests are now open note.

“What sets scientists apart is their ability to digest scientific information and apply it and really have scientific literacy,” Dr. Hubin said. “None of that is memorization; it’s about really digging deeper into material.”

Similarly, science teacher Zachary Hund said the uniqueness of his test questions reduces the effectiveness of outside resources. His tests are also all open note.

“I would like to think that my students are not using the internet to search for answers, which also goes into why I try to make questions that are very unique and things you can’t Google, at least for my AT Chemistry class,” Dr. Hund said.

While he hopes his students would turn to their notes before the internet when stuck on a question, Dr. Hund said he and teaching colleague Kenny Fournillier have taken steps to reduce the stress of testing, so students feel less inclined to cheat.

“With Chemistry C, Dr. Fournillier and I decided to drop the percentages pretty significantly in terms of how much an exam counts for,” Dr. Hund said. “Hopefully, knowing that an exam really ends up actually being less than a homework, I would hope, encourages less students to cheat or think about cheating.”

Like Dr. Hubin, Dr. Hund does not plan to use in-person classes for tests. Instead, his classes will do experiments.

“I am more worried about making the in-person experience worthwhile, rather than using it as an excuse to give a locked-down assessment where I know students can’t cheat, because the other thing, too, is half of my students are going to be remote, so there’s no way to give everyone the same test anyway,” Dr. Hund said.

“As always, assessment is set by the teachers in the department. As a school, I encourage us all to have a healthy balance between coursework, assessments and room just to be together and have fun as a community,” Mr. Beekmeyer said.

So while these tabs may stay open and these conversations keep happening, the goal for teachers in the hybrid format is not to become a watchful eye over tests, but rather to capitalize on the other opportunities presented by in-person classes.

The Midway spoke with five students about testing and cheating in U-High’s distance learning environment. Some of their names were withheld in this story.

Pencil, eraser, paper — two pages of blank questions waiting to be answered. The clock ticks. Close by lie notes, Google and a phone full of contacts. For many students facing a challenging test and little supervision, the option is clear.

While some students continue to consider testing a crucial component of a quality education, pressure to meet Lab’s high academic standards, difficulty absorbing material over Zoom and access to limitless resources on the internet have led many to resort to — and rely on — cheating.

Like many, most of Student A’s tests are open notes, a tactic that some teachers have adopted, hoping to discourage cheating by allowing students to use their notes to answer more difficult questions. However, when the time comes for Student A to sit down and take a test — it’s not just their own notes that they’re looking at.

I guess it’s much harder to pay attention in class, and then I also know that if I ask someone a question, I won’t necessarily get caught. It’s kind of just like I have all the resources, you know, and it’s very easy — especially when you don’t necessarily know the material well.”

“Google is my friend,” Student A, a junior, said. “Yeah, I know it’s wrong, but in the end it helps me get a better grade, which helps with a better GPA.”

While pressure to meet high academic standards has long been felt by students at Lab, according to Student A, distance learning amplifies this pressure by giving students an alternative and direct path toward better grades — one that is particularly compelling for people like Student B, a sophomore who feels like they simply aren’t absorbing material as easily remotely compared to in-person learning.

“I guess it’s much harder to pay attention in class, and then I also know that if I ask someone a question, I won’t necessarily get caught,” Student B said. “It’s kind of just like I have all the resources, you know, and it’s very easy — especially when you don’t necessarily know the material well.”

According to Student C, a junior, cheating has increased in distance learning not just because of academic pressure, but because of social changes, and the feeling that it is all right to cheat if friends are doing it, too.

“I think many students think it’s justified to use outside resources, especially their notes, because they believe that everyone else is doing it,” Student C said.

Clearly, however, these social pressures do not extend to every corner of the school. Sophomore Ameya Deo, who takes the majority of his tests on Zoom, has not noticed a tendency to cheat among classmates and peers.

“I don’t see people like asking, ‘Hey, do you want to compare answers?’” Ameya said. “Whenever that does happen, it’s after the deadline, but there’s definitely no communication during tests or quizzes in class — people just aren’t comfortable with that.”

According to Student A, academic dishonesty often isn’t something people speak openly about. While some delve into the social aspects of cheating — like FaceTiming or texting friends — others, like Student A, cheat in solitude, fearing judgment of peers that do not appear to be cheating themselves.

“When a student cheats, it’s because they know they can. They know if they don’t, they will fail, or because they don’t want to be the only student who didn’t do good,” Student B said. “But when people know what I did, and when it’s wrong — I get embarrassed.”

Ameya believes that even if cheating has become a more common occurrence, eliminating testing from the curriculum would do more harm than good.

“The best thing I feel like teachers should do is maintain normalcy, and testing and quizzes is a part of the curriculum,” Ameya said. “It also takes away kind of the intensiveness of the curriculum, something Lab really prides itself on — without tests and quizzes, I don’t really have an incentive to remember a whole lot.”

Furthermore, junior Will Trone believes some students’ tendency to cheat will just never go away, no matter how many adjustments teachers make to their tests.

Though Will has not had particular trouble in remote learning, he noted that students who are struggling academically likely have much more incentive to cheat than he can personally relate to.

“There are a lot of people who are struggling significantly more, and people who have become reliant on cheating over remote learning, like, I could see that being, you know, a problem — and not necessarily a problem that’s all their fault,” Will said. “I think there’s a lot of blame being thrown around that isn’t necessarily warranted.” 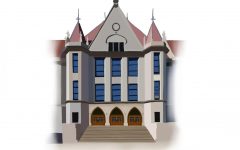 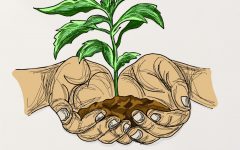 Doing our part: the Lab community’s role in the climate crisis 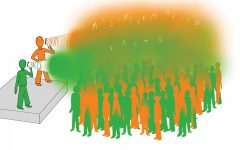 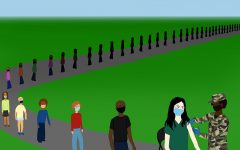 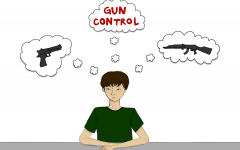 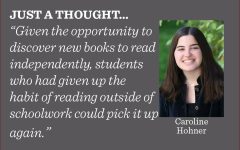 The Lab administration should modify curriculum to encourage independent reading 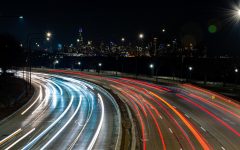 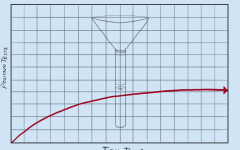 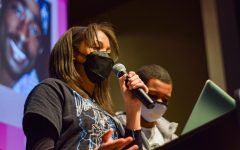 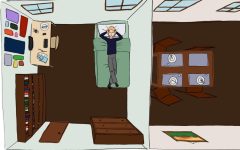 Families connect in face of isolation