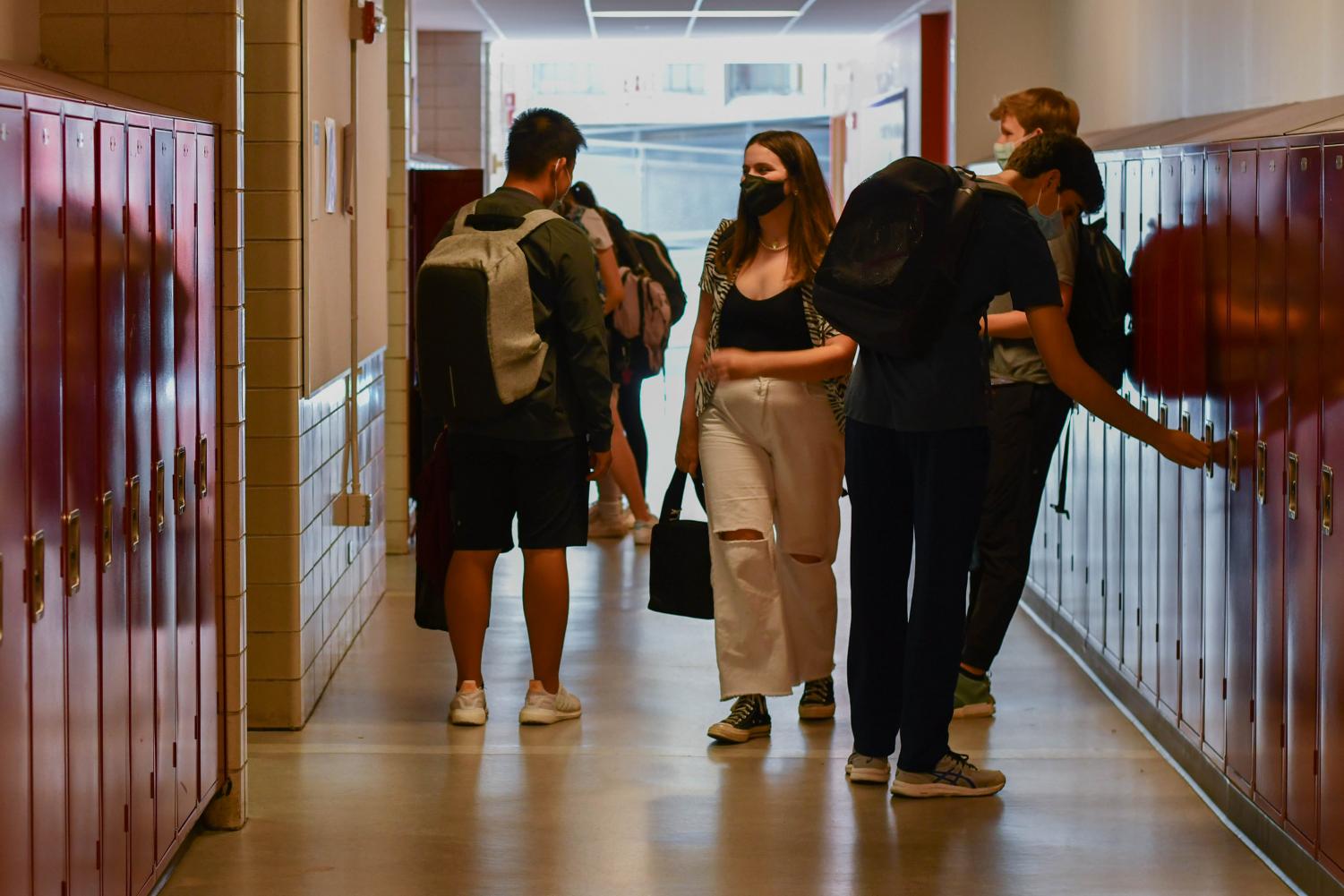 Students converse in the hallways as they commute between classes. While students are physically back in person, much has changed since the last in-person fall at U-High. (Chloe Ma)

Students converse in the hallways as they commute between classes. While students are physically back in person, much has changed since the last in-person fall at U-High.

Distance learning took a toll on the daily life of students across the Laboratory Schools. With the return to in-person learning, everything changed. The Midway spoke with students and teachers to discern how social and academic aspects of life have been impacted.

The moment Kira Sekhar, senior, entered the U-High building on Sept. 8, she immediately faced an overwhelming mass of individuals, most of whom she didn’t know, which was a sight foreign to her during her distance learning experience last school year. 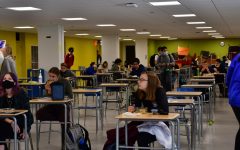 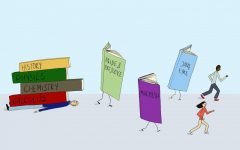 Undergoing the drastic change from interacting with a few close friends frequently during distance learning to seeing both familiar and unfamiliar faces daily during in-person learning has led to students feeling uncomfortable and pressured socially.

During distance learning, Kira typically interacted with her close friends and rarely talked to other individuals in her class outside of breakout rooms. Therefore, with the return to in-person learning, Kira finds that socializing in large groups has been awkward.

“I have definitely had some social anxiety in the past few weeks, but I do think I am adjusting to it as it gets more normal to be back,” Kira said. “The first two weeks were definitely a little anxiety-provoking, especially in the cafeteria since it’s so crowded there.”

The lack of social events in previous years has also imposed pressure on students to feel forced to engage in communal activities, something sophomore Cameron Grant has experienced.

“If there’s an opportunity to go out or go to a sporting event, let’s say, I feel pressured to say yes, even if I don’t really want to go,” Cameron said. “I feel like I have to make an excuse if I don’t want to agree to plans. So most times, I just agree to go.”

Similarly, ninth grader Allison Li wasn’t too engaged socially during distance learning during most of 2020-21. With the return of a typical school schedule and activities, Allison felt pressure to compensate for missed opportunities in previous years, such as joining clubs and sports teams. Due to the overwhelming amount of activities she enrolled in during the past month, she had to drop some.

“I joined the tennis team so I could interact with more upperclassmen,” Allison said. “I also thought that if I joined more clubs, I could make more friends, so I joined a lot of clubs that I simply could not handle and had to end up quitting a lot of them.”

Kira also found it difficult to make the same level of commitment to clubs as she did in previous years.

The old schedule, all my classes every day, homework, college applications and still feeling like I should be giving so much time to my extracurriculars, which obviously I care a lot about, is overwhelming.”

“I do feel internal pressure from my extracurriculars to be more involved, but at the same time, it’s stressful and overwhelming to go back to how busy that used to be,” Kira said. “The old schedule, all my classes every day, homework, college applications and still feeling like I should be giving so much time to my extracurriculars, which obviously I care a lot about, is overwhelming.”

The social pressure with the return to full school classes and activities has been difficult for senior Erik Erling to manage. Since he doesn’t want to miss out on opportunities during his final year of high school, he finds he has to participate in more social events.

“For me, it’s less about not having had it for a while and more about it being my final year,” Erik said. “Up until this year, I had never been to club shopping, but this year, I really felt like I should join some clubs.”

Erik noted that his distance learning experience has allowed them to handle social stress better.

“During lockdown, I learned that I really like free time alone, so if I am feeling overwhelmed, I can go home and do nothing, or go to Gordon Parks and find a quiet corner to sit on my phone,” Erik said.

While Kira finds it difficult to balance everything she is involved in, she continuously reminds herself that she shouldn’t put too much pressure on herself when it comes to engaging socially.

“I think I just have to remind myself that school is my priority right now, and that has to be my priority,” Kira said. “If that means that I can’t be as dedicated to certain activities right now, then that’s OK, and I shouldn’t beat myself up about that because we are still in a pandemic and still adjusting to this new ‘normal.’”

Even though students are now back in person, many are experiencing breaks from tradition such as “flipped” classrooms, take-home tests and online gradebooks, all products of how teachers adjusted their classrooms to distance learning. Last year, not only did teachers have to figure out how to structure homework and lessons without meeting in person but had to adjust to having less synchronous time with students.

Distance learning pushed teachers to use new tools that they hadn’t before, such as live online gradebooks.

“There had been lots of discussion in the high school in previous years about using online grade books,” math teacher Joseph Scroll said. “We used it last year because it just seemed like the best tool during the pandemic.”

Many teachers have increased their reliance on Schoology to organize homework, class materials and grades. History teacher Charles Disantis said he’s used Schoology’s gradebook to allow students to access their grades at any time.

English teacher Darlene McCampbell said she was the last one in her department to start using Turnitin, a platform that lets students submit assignments and allows teachers to check for plagiarism.

During distance learning, classes met synchronously just twice a week, so teachers had to adapt and rethink how to use class meetings time effectively. Science teacher Matthew Martino did this by recording lectures that students would watch outside of class.

“I lecture outside of class, and then you come in and you do the problems there. There’s lots of evidence that this is a great way to do it,” Dr. Martino said. “When you have a problem with some physics problem, I’m there and I can lend some expertise on how you might go forth on it. So that part I’m definitely keeping.”

Many teachers also adapted the way they tested students during distance learning. Dr. Martino allowed students to resubmit quizzes and tests as many times as they wanted. Students also had partners to work with on every quiz.

Dr. Martino plans to continue allowing students to retake exams and work together on some quizzes.

Mr. Scroll said that Calculus AB teachers will be giving take-home portions for tests that would usually have to be given during 75-minute periods.

“We’re taking what we think is the easiest part of the test and making it the take-home part. The mindset there is we don’t want kids to be cheating,” Mr. Scroll said. “But the hope is, even if they do, it’s not going to really change the grade on the take-home assessment, and it’ll save class time, it’ll give us more time to do more problems and to just cover the course in a better way.”

It’s nice to have the long period math not taken up by a test. In my opinion I like having that work time. I always appreciated classes where I could get work done before I left.”

“It’s nice to have the long period math not taken up by a test. In my opinion I like having that work time,” Natalie said. “I always appreciated classes where I could get work done before I left.”

Students in Mr. Scroll’s calculus class will also only turn in four questions from the set they are assigned for homework.

Natalie said that in the past she struggled with staying on top of homework as it took her a long time to complete problem sets, but with the new adjustment that students are only required to turn in four questions, it’s been more manageable.

“I can work on the problems I need to turn in, and maybe as many as I can get done, and then go back to the ones I haven’t gotten done or focus on the ones I didn’t understand another night when I have less of a load,” Natalie said.

Mr. Scroll said he feels he’s returning to teaching in person with a bigger breadth of tools at his disposal.

“Everybody learned a lot last year and I think teachers, students, every day was brand new,” Mr. Scroll said. “We’ll have to see how the year goes and how it turns out, and what happens, but I already feel like in this first week and a half that life is way better than it was at any time when we were completely remote last year.” 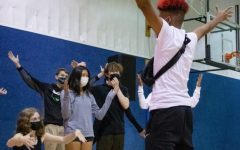 After a year of separation, sophomores connect during retreat 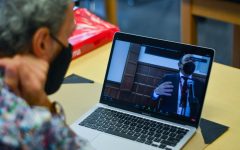 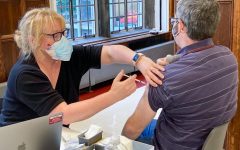 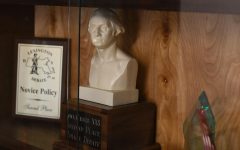 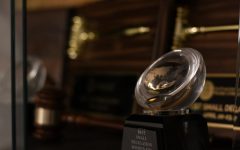 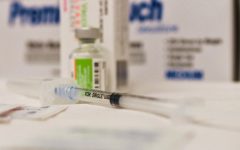 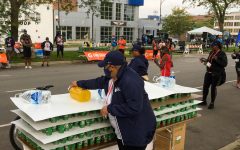