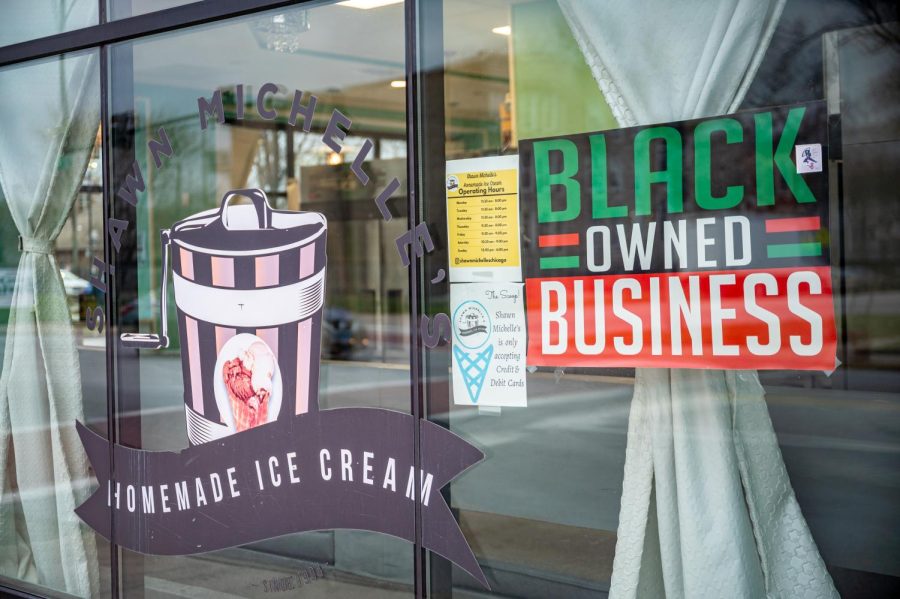 Gallery|6 Photos
An Ngo
The front of Shawn Michelle's features their logo along with a "Black owned Business sign."

Even on a cold day, Shawn Michelle’s Homemade Ice Cream remains a hot spot for the Bronzeville community to gather. The liveliness of the restaurant flows through the classy jazz music, echoing laughter and the aromas of caramel and fudge.

Thanks to hard work, entrepreneurship, and both community and grant funding, the success of Shawn Michelle’s has allowed it to give back to its community in Bronzeville, a message they hope other small businesses in the neighborhood can carry on.

According to co-owner Nataki Muhammed, “Bronzeville does not have a business like Shawn Michelle’s.”

Shawn Michelle’s was first founded in 1996 and operated in Blue Island, and later Avalon Park. For the past three years, the shop has been located in Bronzeville’s historic Rosenwald Courts Apartments at the corner of East 47th Street and South Wabash Avenue.

During the pandemic, Shawn Michelle’s thrived and expanded since many regulations other restaurants faced did not apply to them due to their lack of seating. Ms. Muhammed said Shawn Michelle’s opened another successful location last year at the Time Out Market in the West Loop and plans to open another restaurant in south suburban Olympia Fields in May.

Ms. Muhammed believes Shawn Michelle’s has worked hard to propel itself as a pillar of the Bronzeville community. In the past few years, the store has raised nearly $5,000 in scholarships for five students.

The introduction of the Bronzeville-Black Metropolis National Heritage Area Act by U.S. Rep. Bobby Rush, which will include $10 million in federal funding, will help the expansion of small businesses in Bronzeville, such as Shawn Michelle’s.

Wadi Abdullah, an employee at Shawn Michelle’s, credits grants with allowing them and other small businesses to flourish and give back to Bronzeville.

“When we get opportunities to make something our own, then of course we care,” Mr. Abdullah said. “And those opportunities, they come in forms of grants.”

He believes that businesses in Bronzeville deserve this grant to give back to the community and fulfill their intentions of what the neighborhood can be.

The staff at Shawn Michelle’s acknowledges that love is put into every scoop of homemade ice cream.

“Here at Shawn Michelle’s our big emphasis is just love. That’s the first ingredient in all of our ice cream,” Mr. Abdullah said, “and when you come in here, first thing I say is ‘Welcome home.’”